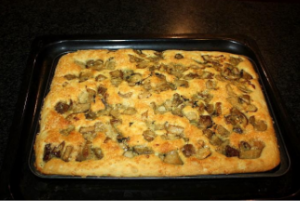 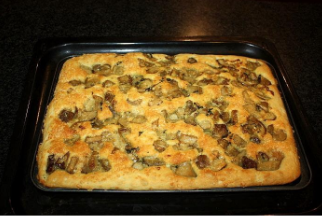 Focaccia is  traditional Italian yeast bread , which is sometimes compared to pizza. But the main thing here is not the additional garnish products, as with pizza, but the bread itself.

Focaccia is one of the  many excellent Italian pasta products,  which has long since crossed the borders of its homeland and is very popular all over the world.

If you want your home to be filled with an irresistible aroma, and your palate to look forward to the first bite, make yourself  whole grain focaccia with dried mushrooms and oregano.

How to prepare a good focaccia?

Focaccia was used in ancient times for an open hearth, which was located in the center of the house and was called  focus.  At that time  yeast was not known  and the dough was kneaded quite simply from flour, water, salt and olive oil. .

In those days, according to the Italians, olive oil was even cheaper than flour, because  Italy  was  the land of sailors , not of farmers. The sailors baked the loaves directly on the hot stones on the deck. Historians believe that  focaccia is the ancestor of pizza. In ancient Rome  the phrase  panis focacius  meant flat bread made in ashes.

In the future, the recipe became more complicated and the  great-grandmothers of modern Italians  began to use all kinds of products they had in the house. Anchovies, mushrooms, olives, seasonal vegetables and cheese were placed on the flat cakes. The classic focaccia is prepared in a stone wood oven and served with appetizers, salads, soups and meat dishes, and can also be used as  bread for sandwiches. 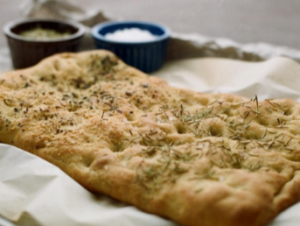 The focaccia can be round or rectangular, thin or thick. Basically it’s  flat bread with no filling inside . Focaccia can be made of white flour as well as wholemeal or rye.

The dough is kneaded with yeast, which is shaped like a pie and  before baking it is usually spread with olive oil  and pressed in places with fingers to make dents.

These “pockets” retain oil, spices and herbs that give flavor, and the oil prevents the bread from drying out.  Well-cooked focaccia  should be light, porous and fragrant, not greasy and heavy.

Thanks to the use of various products and spices for garnish on top, and sometimes as a filling, a new taste is obtained each time. The irresistible  aroma of bakery products  is largely due to spices such as rosemary, oregano, basil and other herbs.

The different regions of  Italy  have their own traditions of making focaccia. For example,  focaccia Barese  (Bari) is made with fresh tomatoes or thinly sliced ​​potatoes,  focaccia Genovese  and a thin loaf, traditional for  Genoa , seasoned with olive oil and red onions.

We also have to mention  focaccia di Recco (Liguria), which is the focaccia with cheese. The sweet option is  focaccia veneta,  a traditional Easter delicacy from the  Veneto region.

More and more people are turning to  wholemeal breads  either because they are more dietary or simply because of their taste. Only  wholemeal flour or a mixture of white flour can be used.  More yeast and a little olive oil are needed.

Your focaccia will become very special if you  prepare it with mushrooms and sprinkle with oregano . There are several options. You can use fresh mushrooms, but in this case we focused on dried mushrooms, which  give an incredible flavor to the bread. 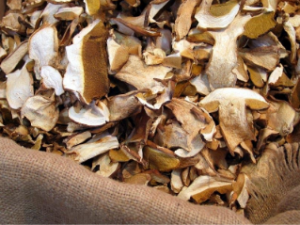 The mushrooms must be pre-soaked to become juicy. For splendor, finally add grated hard cheese and  bake in the oven.

Recipe for Wholemeal Focaccia with dried mushrooms and oregano

Method of preparation  – Dissolve the yeast in a little warm water, adding a little sugar. Then in a deep bowl  mix the yeast with the oil, flour and salt  and stir.

Cover with cling film and let it  rest in the fridge  for a few hours. Then finish fermenting for an hour at room temperature until it doubles in volume.

Grease a flat surface  and knead the dough on it, which should become soft, smooth and elastic. Let it rest for  10-15 minutes  and then roll it out evenly.

Meanwhile,  prepare the dried mushrooms  by washing them first. Pour boiling water over the mushrooms and leave to soften for  15-20 minutes.  If you use fresh mushrooms, stew them briefly with a little garlic and dill and leave them to cool.

Shape the focaccia with your hands in the pan,  smear it with olive oil and press with your fingers in places so that slightly dents are obtained. Arrange the mushrooms on top and sprinkle with oregano.

Finally, sprinkle with grated Parmesan cheese.  Allow the focaccia to rise again for an hour and after about twenty minutes you will see the first bubbles appear.

After  60 minutes  the focaccia is ready to bake at  220 °  for twenty minutes in advance preheated oven and no ventilation. To get a  suitably thick and crispy crust,  place a pot of boiling water at the base of the already hot chamber.

Spray the walls of the oven with water immediately after  putting the tray with the focaccia  to get a good amount of steam. Repeat the operation when  3-4 minutes have elapsed.

When the focaccia looks golden brown, take it out of the oven and check that it is  well baked in the base.  If all is well, place it to cool briefly on the oven rack.

You can  serve it hot or cold . It is delicious even the next day, keeping it in the oven for a few minutes

Do Bulgarians like such a recipe and how to prepare it at home?

There is no tastier bread than home-made. The taste of the Italian focaccia is liked by the Bulgarians and can take a  worthy place in the home menu.  The focaccia with mushrooms is suitable for the festive table or for diversification of every dinner.

You can make  whole grain focaccia with dried mushrooms and oregano at home,  by including the spices you like. All products for it are available in our country, and if you do not find original Italian ingredients, you can easily replace them with ours.

The stores now have  a variety of quality flours , including wholemeal, which you need for this recipe. The  supply of dried mushrooms  is not a problem either, and you can replace them with other dried mushrooms or fresh ones.

Oregano is a spice that is also used in Bulgarian cuisine, and our herbs are  of high quality.  Instead of Italian cheese you can try Bulgarian yellow cheese and the result will be excellent. 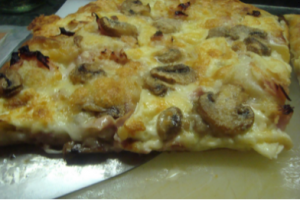