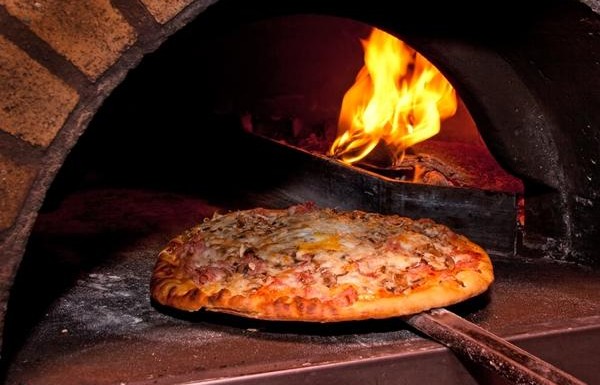 The History of Pizza

Pizza has a long history – older forms existed as early as antiquity, in Egypt, in Ancient Greece, in the Etruscan and Persian civilisations…

The Egyptians made flat round pastries sprinkled with spices. This can be considered a distant prototype of the Italian Bianca pizza, known today. 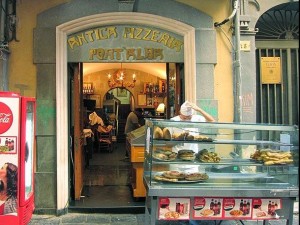 And in Plato’s “Republic”, a flat sort of bread with a round shape is mentioned, on top it is garnished with seasonings, garlic, butter and olives.

Interestingly, they had a speciality called “plakuntos” – the pastry was served with a variety of sauces and garnish. The troops of Darius the Great, who were always marching, are also known to have eaten something similar to today’s pizza. They baked a type of bread on their shields to which they added dates and cheese.

In Ancient Rome the legions brought another kind of vegetable-laden bread from Palestine, they also baked flat bread with honey on stones. It seems these pastries were very common and not just as home-made food prepared with “whatever was lying around”.

Among the remains of the city of Pompeii, swept away by the lava of the Vesuvius volcano in the year 79, shops were discovered, the equipment of which approximates present-day pizzerias.

The version closest to our modern pizza comes from Italy. The “homeland” of pizza is considered Naples before the Renaissance. It was a pastry made of wheat flour with lard or olive oil, sprinkled with green spices and cheese.

Tomatoes began to be added at the middle of the 18th century. Although they entered Europe two centuries before, they had long been considered poisonous and cultivated decoratively. The poor “ventured” to try tomatoes and so this vegetable became a must.

The first pizzeria in today’s sense dates back to 1830 and it is still open today. At that time there were already some popular pizza recipes which included olive oil and garlic, anchovies, as well as cicinielli and mozzarella.

Italian pizza has so many varieties that it is difficult to cover all the regional breakdowns in detail. However, we can see some peculiarities of some of the most popular pizzas, which are indicative of Italian culinary traditions in the respective regions of the country

The preparation of Sicilian Pizzolo is very specific. This kind of stuffed round pizza comes from the town of Sortino and is made in a unique way. The dough is first baked partially, then cut into two layers and sprinkled with prosciutto, tomatoes, mozzarella, sausages, plants.

Then it is “assembled”, olive oil is added on top, along with grated parmesan, thyme or oregano and after that it is baked some more. There is also a dessert version with honey, cheese and pistachios, as well as a variant with two different kinds of stuffing in each half.

The scacce pizza from Ragusa in Sicily differs even visually – it is more like a strudel and there are variations in the cities. The pizza can have only cheese and tomato sauce on top, or it can have sausage, potatoes and other vegetables.

Another type of specific pizza is Sfincione from Palermo. Unlike the others, the dough of this rectangular pizza has to rise, its name can be translated as “sponge”. Toppings are placed before baking – onions, tomatoes, sheep’s cheese, anchovies, breadcrumbs.

The well-known Neapolitan pizza has a style protected by law. Pizza Napoletana‘s dough is made from at least 80% high-refined flour. It lasts two hours, then balls of 200-250 grams are made, and it rises again, but longer – between 4 and 6 hours. Then the balls are spread out, thin in the middle, and the frame is thickened to an inch or two. It is baked for a minute or a minute and a half at 485 degrees in a charcoal furnace. The pizza has mozzarella, olive oil, tomato sauce for acid and anchovies.

Among the varieties of Italian pizza is the Roman Pizza al Taglio. It is thin, rectangular, baked in electric furnaces. It can be topped with cheese and olive oil only, but it may also have mushrooms and sausage.

The Most Popular Pizzas

The various types of Italian pizza are not accidental – each, according to the culinary traditions, delivers specific flavours and aromas. So all this diversity has spread throughout the world. 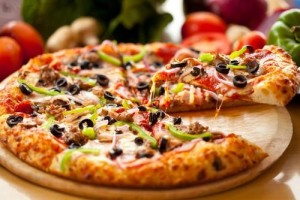 And yet there are some varieties that have become the most popular. Linking the history and traditions of Italian pizza to Naples undoubtedly “ranked” the Neapolitan first.

It is considered the most authentic and is an emblem – one cannot speak of Italian pizza without having tried Neapolitan. It is prepared with products specific to the Naples area. The tomatoes are a special variety – San Marzano, named after the field where they grow. According to legends, the kingdom of Naples received the seeds as a gift in 1770 by the Kingdom of Peru. It is especially interesting that in Italy this tomato grows on volcanic soils from Vesuvius. The mozzarella cheese used is made from buffalo milk and there is a specific way of preparing the dough. Olive oil, garlic, oregano, basil and anchovies are also used.

Neapolitan’s lead in the competition is actually challenged by the Margarita pizza. Margarita is so popular that it even entered UNESCO‘s list of world heritage.

This pizza also has an interesting story. With it, thanks to female curiosity, Italian pizza became a royal speciality. Before, it was considered food for the poor.

The most popular version connects this pizza with the name of Margarita Savoyska. In 1889, the wife of Umberto I wished to try a Neapolitan pizza. The most famous pizza maker in Naples was called on, who made three types of pizzas, improvising with one of them visually – with the tomatoes, parsley and mozzarella the colours of the Italian flag were shown. The Queen liked it, the pizza was called “Margarita” and it entered the royal courts. It is prepared with tomatoes, mozzarella, fresh basil, pepper, salt and olive oil.

Quattro stagioni is also one of the most popular pizzas and its preparation is quite original. The name translates as “4 Seasons” and actually combines 4 kinds of pizzas. In line with traditional products, it includes ham, mushrooms, artichokes, anchovies and black olives. Quattro formagi contains tomato sauce and 4 types of cheese, “Prosciutto” has the world famous ham of the same name and so on.

The Ingredients Used Most

Italian pizza has many varieties – salty, sweet – for example, with ice cream, vegetarian, with meat, fish, seafood, cheese. There are also pizzas with ingredients that are not combined generally – for example, chocolate and tomato sauce. They even differ in the dough, which is, after all, at the foundation of pizza – thickness, roasting etc. The cheeses used are also numerous – hard and soft, with different salinity etc. The most popular are Parmesan and Mozzarella. 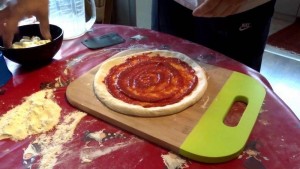 Regarding the vegetables for Italian pizza, the most popular are tomatoes, which can be used fresh, dried or in the form of tomato sauce. In fact, tomato sauce is a must. Tomatoes entered Europe in the early 16th century and since that time have become a traditional ingredient of Italian pizza. Tomato sauce is one of the culinary emblems of Italy and its preparation is art, even more so, there are different options.

Naturally ripened fresh tomatoes are used, but they should not be too ripe. Juicy onions are used for the sauce – sliced and boiled, balancing the acidity of tomatoes – and olive oil. As spices for the sauce, basil, rosemary, parsley, thyme and sage are used. Many of these spices are also used in pizza itself. For flavouring garlic, chili peppers and others are also used.

For Italian pizza, spinach is also very popular, and there are variants – with cheese, egg and so on. Broccoli is also popular with the cheese. For flavor enrichment, green peppers, green and black olives, mushrooms and artichokes are often used. Meat pizzas can have fillet, ham, bacon, chicken, salami, lard or fish.

Pepperoni Pizza is very famous. It actually bears the name of a spicy sausage that is put into the topping. It is traditional for southern Italy, but is popular both in the country and in the world. Anchovies are a trademark for Neapolitan pizza, which also makes them a culinary emblem.

Pizza is definitely a culinary record maker – more than 5 billion pizzas are sold all over the world annually.

This extraordinary popularity of Italian pizza makes it desirable for various promotional attractions, records and shows. This is how many curious stories are associated with it. 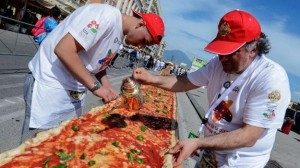 The 8.5-ton pizza record of 1978, made under the direction of Lorenzo Amato, will remain in history. He was a pizza master based in New York. The huge delectable, which was 24.4 metres in diameter, was divided into 60,000 pieces. This Guinness record, however, was shattered in 2012 by a classic Margarita with a 40-metre diameter, weighing at 23,250 kg. It was cooked over five days by five Italian chefs, the flour used weighed 9 tons, the tomato sauce – 4.536 tons, the cheese – 3,992 kilograms, the margarine – 675 kilograms, the lettuce used was 100 kg and so on.

Records have also been made about the largest crust and its spinning. In the US in 2006, Tommy Gemignani spun 500 kilograms of dough into the air for a whole 2 minutes. This happened during filming for Guinness world records, when Joe Carlucci flung 567 grams of dough at a height of 6.52 metres.

Again because of the popularity of pizza, in Italy there is even … perfume with a pizza smell! Of course, there are also pizza eating competitions in different places. It sounds amazing, but in one of these competitions, 45 pieces “disappeared” in Jo Chestnut’s mouth in 10 minutes!