Bread is the simplest product that requires only a few ingredients: flour, water and yeast. But it’s worth adding a few extra components, changing the shape or time of the dough, and the options of your favorite pasta will become hundreds. In Italy, each region boasts its own types of pasta and tastes divine.

Types of Italian bread by region and how it is prepared

Pane di Altamura bread is made in all corners of the pearl of southern Italy – Puglia. It is made from premium wheat flour, water, yeast, salt and malt. Durum wheat is rich in gluten, which makes the product particularly healthy. The altamura is baked in a wood stove or in a stone oven. The crust of the bread is very crispy and the inside is light yellow in color. Bread with a round shape with one or two slits at the top.

Mother’s Bread or the Horn of Plenty

Matera Bread (cornetto di Matera, pane di Matera, Corno di Matera) is the gastronomic emblem of the eponymous city in southern Italy, the name of which is quite famous in our country, since in 2019 it was the European capital of culture at the same time as Plovdiv. This long-standing pastry product owes its well-deserved glory to the successful amalgam of several elements: the purity of spring water, the high quality of durum wheat and the leaven, the careful processing and, finally, the perfect roasting, which is preferably done in a wood oven. The tradition of this Italian bread has its roots in the distant past. As numerous sources testify, history goes back to the Kingdom of Naples when bread was baked in a cave as a sacred ritual.

The tradition is preserved to this day, and Matera bread has a specific horn or crescent-like shape with three slices. Maternal bread has great durability – 7-9 days. 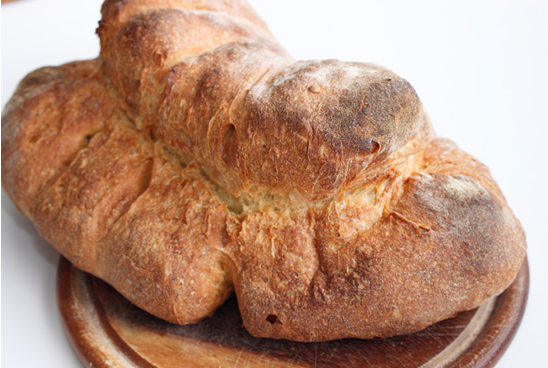 The typical bread from the Valle d’Aosta region is called Pan Ner or Black Bread. It is made from rye flour. It has a hard thin crust and a compact structure. It is often flavored with caraway or seed seeds. Today, there are still bakeries in the region that produce Pan Ner in antique ovens. 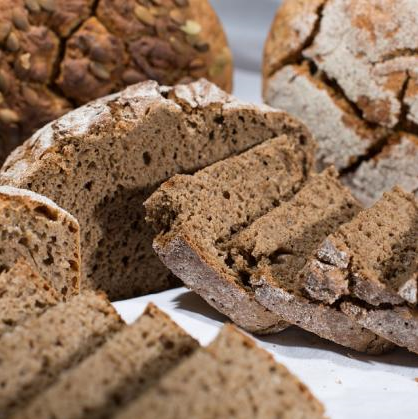 The Venetian traditionally bakes Bovolo bread. He stands out among his brothers with an unusual spiral shape. The bread is mixed with flour of soft varieties of wheat, water, salt, yeast and beer. The dough is divided into small pieces and twisted into a spiral. The result is small gold buns weighing no more than 150 grams.

In the province of Vicenza, which is also located in the Veneto region, they maintain the tradition of making Cioppa or Cioppetta bread. It surprises with its cross shape with more drawn or rounded sides. It consists of flour, water, several types of yeast and salt. The finished product has a compact structure and a crisp crust. Most often, Chop is cut into individual breads and used for sandwiches.

Ciabatta is one of the most famous Italian breads for the home consumer. The peculiarity of the product is a large amount of liquid in the composition (70% of the total flour mass). It is easily recognized by its dark bark and strongly porous interior. The taste is tender, slightly salty. 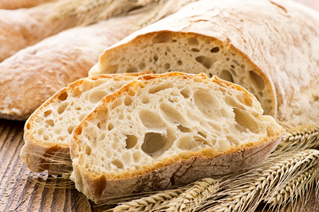 Calabria’s Pita Bread is round, flat and soft. It is made from flour, water and yeast. This type of bread is characteristic of the Middle East in general. Pita not only accompanies the main course, it is also used with sauces or just for a light meal. 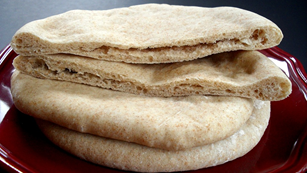 Rural Pane Cafone bread is typical of the Campania region, but is common throughout Italy. The peculiarity of its preparation is that the composition contains a mixture of wheat and semolina. This combination makes the taste of the product refined and rich. Its crust is crunchy but a little firm. Although Cafone has emerged as food for the poor, it is now considered one of the best breads in Italy. 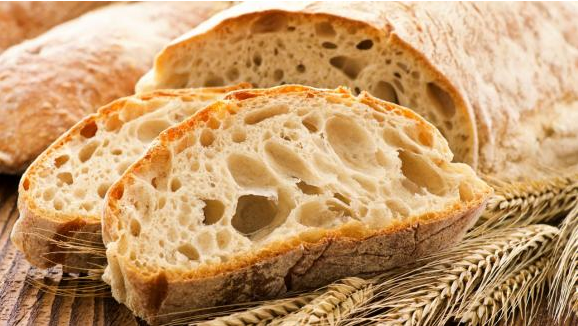 The main character of Lazio’s bread houses is undoubtedly the Pane Casareccio di Genzano’s home-made bread. This product has a protected geographical name. It is made from flour, yeast, salt, water and wheat bran. The weight of the bread varies from 0.5 to 2.5 kg and its crust is dark in color. The aroma of Genzano’s bread is described as the smell of fresh grain. The taste is pleasant with a slight acidity.

Liguria is known for its Focaccia Genovese. It is made from wheat flour, olive oil, salt, water and yeast. This is a real delicacy that can be consumed both early in the morning for breakfast and in the late evening as a pleasantly supportive meal. At dinner, she is accompanied by a small glass of white wine. There are many options to complement the classic bread. For example, focaccia with onions is very popular. Finely chop the onion and add to the dough. It is also traditional to sprinkle olives or sage on top. Some of the more modern versions include stuffing with meat, cheese, tomatoes or a sweet version with nuts and raisins. 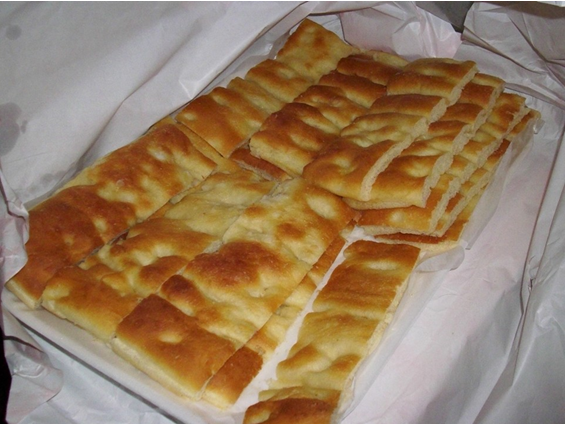 Michetta is a type of bread widespread in Lombardy and especially in Milan. It is easily recognized by its typical star shape. To prepare it, flour is mixed with water, malt and yeast. The dough is pressed for at least 16 hours. There is perfect elasticity at the finish. Due to its delicate structure, Miketa is widely used for making sandwiches, but as a rule loses its crispness within a few hours of cooking. 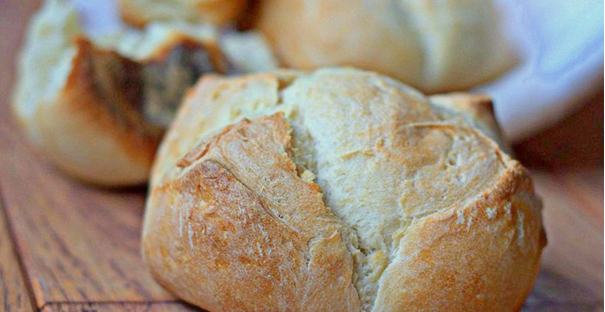 Mantovano is a typical bread product from Mantua province. This is one of the oldest types of bread in Lombard cuisine. It is of two types: Baule and Ricciolona. The second version is supplemented with butter and lard. It is traditionally made from flour, water and sourdough. The finished product is characterized by a dry texture. Mantano has the form of bread with combs shaped with cross sections in the dough. The size of the bread is usually not large: from 30 to 250 grams.

Tuscan bread (Pane Toscano) is known for its “tasteless” taste due to the complete lack of salt. It has a rectangular, ovoid or round shape and a golden bark color. It is often used for croutons, slicing and frying. In 2016, bread without salt acquired the highest quality category.

Pane di Terni bread is made all over Umbria. They make it from wheat flour, water, salt and several types of yeast. The loaves are oval or round in shape and weigh about 800 g. Terni is known for his reputation as “home-made bread”.

Pan Caciato is a cheese bread, a legacy of classic Italian cuisine. In addition to flour, yeast and water, it includes: olive oil, pecorino cheese, nuts and raisins. After pressing, the dough is cut into 650g pieces, left to knead and baked in a preheated oven.

The excursion to present Italian breads has not even reached its midst. It has become clear that not only every region, but every district or city has their own traditional pasta that they are proud of. We can continue the list for a long time, but we will only mention a few more non-standard Italian breads.

Scarpelle is one of Italy’s most unusual breads. Although its composition is quite ordinary (flour, water, salt and yeast), it is quite different from its counterparts because it is not baked but fried in olive oil. The result is irregularly shaped cylinders with golden crust.

Karasau is a typical Sardinian bread whose second name sounds like carta da musica (music paper). It is characterized by its incredible crunchiness, which creates quite a “musical” noise when chewing. It is made from durum wheat flour, water, yeast and salt. It is used in two ways. Dry Karasau accompanies both salty and sweet dishes. Pre-soaked in water, it serves as the basis for a variety of stuffings: meat, cheese, vegetables. 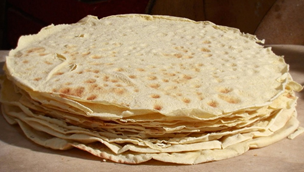 We could not exhaust the topic because it is practically immense. However, we can make a definite conclusion: Italian bread is not just a cookie. It is a brilliant way to win the heart of a tourist once and for all.