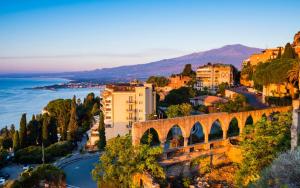 Cuisine of the Sicilian Region

Sicily is the largest island in the Mediterranean Sea and the third most densely populated island in Europe. It is located in the southernmost part of Italy, which makes it even more exotic.

There are some eternal motifs in Italian cuisine from all regions. These are, for example, tomatoes, olives and olive motifs, as well as the edible buds of caperous bush – the so-called capers. At the same time, every Italian region and town has its unique style. So, at first glance, the banal Mediterranean island of Sicily has its own unique identity that clearly distinguishes it from other places, including in terms of culinary traditions.

The varied natural landscape of the island is also reflected in the food that Sicilians put at their tables.

The rich history of the Sicilian region over the last few millennia is expressed in the legacy of several world civilizations. The conquerors and merchants have brought many different cultures that are now part of the local Sicilian flora. Among them are the semolina, which is used for the preparation of the best pasta, and the lentils. It can be said that the famous Sicilian pasta con lenticchie (paste with lentils) is something like a metaphor for the cultural and historical heritage of the island.

Everywhere in this region, especially in its capital Palermo, as well as in the province of Trapani, couscous is consumed according to the Arab traditions, as part of the palette of macaroni products. The Arabs and Berbers, called moors in the past, have brought the citrus fruits to Sicily, making the island even more exotic. Beets grow on the island also due to the same reason, as well as various nuts such as almonds, walnuts, cashews and pistachios, and apricots, melons, rice, nutmeg and saffron. But perhaps the most valuable product on the island, brought by the North African tribes is the coffee, which nowadays has become an integral part of the lives of Italian people.

Phoenicians coming from Lebanon have also influenced the island’s cuisine, as they began producing sea salt in the western parts of Sicily. The Phoenicians are the ones who brought the figs to these lands, as today they grow all over the island and are present in many dishes, not only desserts, and the drying technology allows them to be used all year-round. 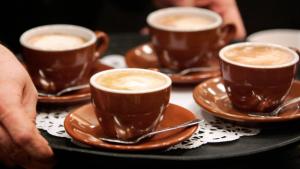 Sicilian food is highly influenced by Greece, which is not far away

The spelt cereal has been brought from there, as well as the passion for seafood. Nowadays, local people even consume the fresh red shrimps raw, just slightly marinated in olive oil and lemon juice. It is a curious fact that the old local cheese Pecorino Siciliano, which is unique of the region, was created by the ancient Greeks at the time when the island of Sicily was part of the Byzantine Empire.

During the different periods of its history, Sicily was conquered for short periods of time by northern tribes such as the Vikings and Germans. They have also contributed to the diversity in the region.

The Vikings, for example, brought apples and pears, but these fruits trees cannot easily adapt to the hot weather on the island. The Germans brought some spices to Sicily, which give the unique flavor of Sicilian dishes and of Italian dishes in general, for example, oregano, basil, etc.

An interesting fact is that the Sicilians are not fond of the classic concept of the “main” dish. Eating on the island is rather a series of different meals, without focusing on one. Here local people cook using the abundant gifts of nature, and therefore the seasonal cuisine is highly appreciated.

It is something like a warm salad with tomato sauce, for which different vegetables are used, depending on the season. 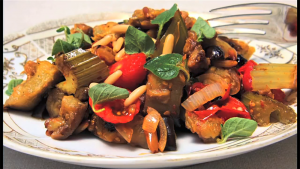 We do not recommend you to skip the arranchini when visiting Sicily. These are stuffed rice balls. The recipe also varies depending on the fresh products that are available for the respective time of the year. To the east, in the ancient port city of Catania, local arranchini are really unique. In the southeastern part of the island, in Siracusa, the rice is not prepared with saffron, but with tomatoes. Arranchini in these region are stuffed with peas, ragu and mozzarella.

One of the dishes that is similar to fast food, typical of Palermo, is called pane con la milza. It can be found as street food near one of thecity’s markets or stations.

Pane con la milza is a sandwich made from a pork spleen that boils for hours and is served in bread. These sandwiches are served directly on the street from large planks. This has long been part of the Sicilian culture.

One of the emblematic recipes for the island is melanzane al parmigiano. This dish contains aubergine cut into slices, with layers of tomatoes and parmesan.

Fish and fish products are also among the favorite foods of Sicilians. They have a variety of sardine recipes – with pasta, or in salad, and they put anchovies almost in everything. The recipe for the traditional Sicilian bread pane Cunzatu, for example, contain anchovies, tomatoes and pecorino cheese. Other popular recipes in Sicily include swordfish.

Of course, meat dishes also have their place at the Sicilian table. The famous veal involtini (rolls) are emblematic of the island – they are a kind of variations of the bragioli.

Very often this pizza is consumed on the street, but the custom also requires to be prepared for the Christmas table. What distinguishes the Sfincione pizza from the other Italian pizzas is that it is considerably thicker. Its filling often includes onion, anchovies and cheese. This pizza is especially irresistible in the town of Bagheria, which is located in the outskirts of Palermo.

Another characteristic doughy food in Sicily is the macaroni called pasta alla Norma. The recipe is named after the opera of the composer Vincenzo Bellini, born is Sicily. The dish is prepared from a short pasta combined with aubergine, tomato paste and salty ricotta cheese.

Traditional pasta for Sicily are the spaghetti or bucatini con sarde. This is the favorite food of the people from Palermo and the surrounding area. They are prepared with sardines from the local catch, which are seasoned with dill, cedar nuts and olives.

Sicily is also popular for its long macaroni products, called busiate, which originate from the local province of Trapani, as they are an integral part of the island’s culinary traditions. You can use the pesto alla Trapanese, which is prepared from tomatoes and almonds, for this dish as well as for all other Sicilian pasta products. Pistachios can also be used for the preparation of the pesto sauce in Sicily. Another interesting option is to make the pesto with capers, pecorino cheese, mint and parsley.

Something you will not see in many places around the world are the so-called panelle. These are small slices of chickpea polenta, fried with spices.

It can be said that the cassata is the local cheesecake variety, but it is much richer than that. In fact, this is a cake а of the sponge cake type with pistachio layers, ricotta and candied fruits, all dressed in marzipan. As a concept, the cassata looks very much like a cake, especially when it’s prepared in a round shape, but this is not a must – some housewives prepare it in the form of other geometric shapes.

There are also other varieties – in terms of cooking technologies. Some Sicilians prefer it baked in the oven – cassata al forno. In the province of Catania, local people prepare the local cassata Catanesa baked. There are also options to replace the ricotta in the recipe and instead to add some gelato ice cream to the filling. In fact, almost every Sicilian dessert can have its own gelato variation, which makes it even more irresistible.

The casatella dessert is similar, but it is smaller and served as an individual portion. Casatella is usually prepared for the Sant’agata celebations. Some call it also minni di virgini – breasts of a virgin.

Sicilian hosts and confectioners are proud of the Biancomangiare dessert. This is a delicate pudding of almond milk flavored with orange essence.

Here, on the island, local culinary masters give life even to the classic marzipan desserts, sculpting them in the form of real fruits and coloring them with cooking paint to achieve an even more realistic effect, as they call these frutta martorana.

Of course, there are also simpler desserts on the island such as crespelle – sweet fried pancakes with ricotta cheese that are served with sprinkled powdered sugar.

The ice fruit temptation called by the Italians – granita, is also popular in Sicily, and we all know it well under the name white frost. It is usually consumed in combination with the brioche bread. An even more tempting and elegant option is the ice frost with coffee, which is also invented by the Sicilians.

One of the most popular wines originated from the town of Marsala in the province of Trapani, which have a guaranteed origin, as well as the Muscat wines, dry wines having the protected geographical indication (PGI) terre Siciliane.

One of the richest grape harvest here comes from the Nero d‘Avola variety, from which are produced irresistible red wines. Its plantations represent one fifth of the total vineyard area of Sicily.

Another very popular grape variety is the Catarrotto. As it is highly dependent on the hot climate, Sicily exports huge quantities of it to the northern parts of Italy, and the other regions buy it to give their wines more density. The rest of the catarratto grapes on the island are used for the production of Marsala wines.  Other varieties include Alicante, Grecanico, and so on.