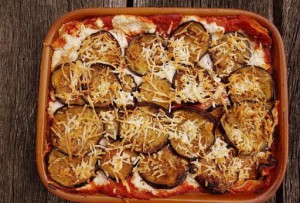 Lasagne is perhaps one of the oldest forms of paste products, that the world knows. Although today we relate its origin to Italy, yet several more countries claim that they first have started to prepare this incredibly delicious dish.

According to one of the most popular stories, about the origin of the Italian lasagne, when the Romans conquered Ancient Greece in 146 B.C., they adopted the local knowledge, culture, and food as their own ones. So, exactly at that time, one of the dishes, that the Greeks prepared, was the dish called “laganon”.

The dish was made of small bread loaves, in which the Greeks put meat and spices. The Romans took the recipe but instead of filling the loaves, they cut them into thin strips and named the dish “lagani”.

Another version of the lasagne origin, claimed that a similar dish was made in England even in the XIV century during the reign of Кing Richard II. The English version of the lasagne, was called “loseyns”, and, that the Royal Court of Richard II knew this dish, а recipe evidenced (according to the English), which was found in one of the first cookery books in Albiona.

To express their claims, Scandinavians, who have a similar dish called “langkake”, also join the queue, and some claims even convey the origin of lasagne as far as to the Arabian Peninsula.

In fact, the ones who wish to head the list of founders of the lasagne are a lot, but the truth is one… whatever happened in the past, whatever borrowings there were, today there is only one lasagne and it is the Italian one. 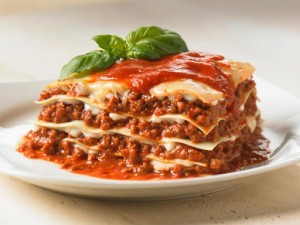 The first written information about a similar dish was found in the official register of the legal deals in Bologna “Memoriali bolognesi” from 1265 to 1436. At that time the notaries had the habit to write verses, notes, recipes, even personal messages in the empty fields of the register. In one of these comments from 1282, it was mentioned for the first time about a dish called lasagne.

The information about how it was prepared at that time was incomplete, but according to the researchers, most likely the first dough was kneaded as dough for dumplings, which was rolled out in thin pastries, which were boiled, roasted or fried in oil.

Initially, the dish was prepared mainly in Rome, and was known under the name of “Lagana”.

The flour from which the dough was kneaded was typically rye, chestnut or corn flour, and the stuffing most often was of cheese.

If you have to compare this variant with the lasagne, that we know today, we can say bravely, that the two dishes have very little in common. “Lagana” was made of thin boiled pastries and cheese, which were simply mixed together.

Despite its not-so-aesthetic appearance, however, the dish quickly became popular, evidence for which were the numerous praises about it by prominent poets and writers from the Middle Ages, some of who even praised it in their works.

In the 14 century, in one of the cookery books “Liber de coquina” was found a recipe for lasagne, which says the following:

This recipe was the first proof that the end of the old Roman version for preparation of lasagne had come. The chefs from Bologna improved it; they started to arrange the dish in layers, to add spices, and it became even more delicious…

But still something is missing, right? What is a classical Italian lasagne without tomato?

They started to add the tomato sauce to the lasagne after 1800 due to a very simple reason – just that the tomatoes were not known in Europe (and Italy) before that.

The gratitude for the tomato sauce in lasagne, however, is not for Bologna, but for Naples, since namely there, for the first time, a version of the dish appeared, which was closer to the modern version of the Italian lasagne.

Originally made mainly by the common people, very soon the rich multi-layered dish, wrapped in rich tomato sauce found its place on the most sophisticated aristocratic table.

The lasagne prepared in Naples was the favourite dish even of Francois II Burbonski, who was called by his father “the Lasagne King”, because of his great passion for this dish.

Today the lasagne dish is typical for many areas of Italy, with its filling varying from meat sauces, vegetables, mushrooms, ricotta, salmon, etc., etc.

Among all this diversity, however, several recipes stand out, which have become popular around the world.

Bologna and Naples – the eternal battle for the Italian lasagne

The disputes between the two cities about the origin of the classical recipe for lasagne did not stop for centuries. From a point of view of the side observer, this dispute is just like the eternal dispute about the hen and the egg.

Therefore, we will not take a side either, and like people, who adore both variants of the dish, we will try to be impartial.

The truth is that the two recipes differ quite a lot from one another. While for the preparation of lasona alla bolognese eggs are put in the dough, and the dough in most cases is coloured green (with spinach), the dough of lasagna Napoli is a solid, wheat dough, and there are no eggs in it.

The sauces are also completely different. In the recipes of Bologna primarily Ragu sauce (Bolognese), Béchamel sauce and Parmigiano Reggiano are used, while with lasagna Napoli, the sauce is Neapolitan Ragu, which is prepared with cervellatine (typical Neapolitan sausage), and the filling is of fried meatballs, boiled eggs, Mozzarella, Ricotta, Parmesan or Pecorino.

What recipe for Italian lasagne is considered classical?

Like all the traditional dishes of the Italian national cuisine, the lasagne has a large number of variants, which were prepared in different areas of the country in 2003.

The National Academy of the Italian culinary art, after a careful consideration of the application filed in the Chamber of Commerce in Bologna, it came out with a decision that recognizes the genuine and traditional recipe from Emilia – Romagna – lasona alla bolognese. 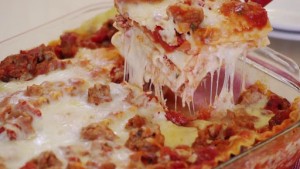 Ragu Sauce: The onions, celery, and the carrots are cleaned and chopped up finely. The fat is heated in a pan and the vegetables are fried until they soften and until the onion obtains a golden – brown colour. The heat of the hot plate should be reduced, and to the already-ready vegetables are added the finely chopped meat, the tomato puree, salt and black pepper.

Dough: A dough is mixed of the flour, the eggs, and the boiled-and-sieved spinach; it is rolled and cut into squares appropriate for the pot, in which the dish will be baked.

In a saucepan, water is boiled with salt, and the dough squares are immersed one by one in order to be boiled. When they are ready, they are taken out and immersed in a bowl with cold water for a short time, so that to stop the process of cooking.

For Béchamel sauce: The milk with the black pepper and the nutmeg is boiled. The butter is melted in a pan, and the flour is added to it by continuous stirring. The stirring continues until the flour is browned and until it begins to separate from the pot. Then, carefully and in a thin stream, the milk is added.

On a tray, pre-oiled with oil (lard); one line of the boiled green-dough pastries is arranged. The pastries are covered well with Ragu sauce, sprinkled with Parmesan cheese, and on the top of the sauce, a new layer of pastry sheets is arranged. The Bechamel sauce is spread on it, and thus a layer of pastry sheets are arranged, Bolognese sauce, a layer of pastries, Béchamel sauce, until we use all the pastries and sauce. Parmesan cheese is sprinkled on the top and the dish is grilled at 180 degrees for about 40 minutes.

If you have not tried Neapolitan lasagne, it is worth doing it, as soon as you get the chance to do it. In Naples, the lasagne is prepared in many variants but the most popular remains to be the Carnival lasagne. (It is called so, as it is prepared for large feasts and for the Carnival in Naples).

The recipe for the Carnival lasagne is the following:

500 grams of dough (ready pastries for lasagne can be used as well), 500 grams of fresh Mozzarella cheese/Ricotta, 400 grams of dry wine (you can do without it as well), pecorino and parmesan cheese grated (about 200 grams), 2 hard-boiled eggs, 300 grams of sausage (Agerola).

For the meatballs: 200 grams of beef and pork meat mixture, 80 grams of breadcrumbs, 1 tablespoon of grated Parmesan cheese, 1 sprig of fresh parsley, salt, and black pepper as much as necessary.

The dough is kneaded, rolled out and boiled in salted boiling water. The cooked pastry sheets are cooled in cold water for one minute, after which, they are arranged on a dry cloth.

Neapolitan sauce: The onion, the carrots, and the celery are stewed to complete softening in a deep container with fat. When they are completely ready, the finely chopped meat and sausage are added to them.  The wine is stirred and added. The vegetables and the meat are cooked until the wine evaporates, then, the tomato puree is added. The sauce is boiled for about 3 hours at a low temperature. (In some of the variants of the Neapolitan lasagne, a few bay leaves may be added to the sauce).

While the ragu is prepared, small meatballs are prepared which are fried in olive oil.

The bottom of the tray is covered with a little sauce, and on top of it, the first layer of pastry sheets is arranged. On the top, a layer of Ricotta is spread, it is sprinkled with a mixture of Parmesan Pecorino. Again a layer of pastries follows, which could be covered with meatballs, sliced boiled eggs, cut dry sausage.

The layers are arranged, by alternating a layer of pastry sheets, a layer of the sauce, the cheese, the eggs and the meatballs. Altogether, the layers of the Neapolitan lasagne must be minimum 5 and maximum 7, and the last layer must be sprinkled with plenty of cheese.

The lasagne is grilled at 180-degree temperature for 20 minutes, then for another 5 – 10 minutes at 200 degrees. Just prior to taking it out, for about 3 minutes, it is baked only at ‘upper’ oven, so as the cheese to obtain pleasant golden crust.

In addition to these two classic recipes for Italian lasagne, there are many other variations of this incredible dish. In some areas of Italy, as Liguria, for example, the meat sauce is often replaced by mushrooms and pesto.

In Umbria and Marche, they prepare a very interesting version of lasagne, which is called “vincisgrassi”, and in which the meat sauce is enriched with chicken meat.

Not to forget Sicily either, where the most popular recipe for lasagne is “alla Norma”, which is prepared with Ricotta and aubergines.

The lasagne is arranged the following way:

At the bottom of the tray we put sauce, then the pastries are arranged, again sauce on top of them, the slices of eggplant, and the Mozzarella; again a layer of pastries, sauce, aubergines, and Mozzarella follows until the pastries finish.

The dish is cooked in the oven for about 40 minutes.

In some of the variants of the “alla Norma”, several slices of boiled eggs could be put on the side of the dish, or garden tea could be added to the sauce.

We think it became clear how many the variants are, in which the Italian lasagne is prepared. Each area of Italy, each entertainment place, even almost every family has its own favourite recipe for this incredibly delicious meal.

Whether it will be white, red, vegetarian, Bolognese, Neapolitan, alla Norma or it will be with products, which you have not even thought that it can be prepared of, the lasagne is ranked at the same level as the  pasta and pizza among the most popular and beloved dishes of the national Italian cuisine.