Spaghetti Carbonara and Bolognese – the Emblem of Italy

We are sure that you love Italian food. We are also sure that of all the recipes that you have tried, Pasta Carbonara and Bolognese are among your favourite ones of the Italian cuisine.

So we decided to tell you some very interesting stories about their origin (plus several recipes of course).

The origin of the Pasta Аlla Carbonara even until today has been wrapped in mystery. And it is not because the recipe is so ancient that it is difficult to trace its path to our table nowadays, but because there are at least several hypotheses about its emergence, each of which, has its supporters and opponents respectively.

According to the most widespread hypothesis, Spaghetti Carbonara is a dish typical for the gastronomic traditions of the area of Lazio, and the first, who thought of preparing it, were the workers, who for months mined coals high in the mountains.

Since their work was far from their homes, the workers carried with them mainly foods which could last for months, without getting spoiled (cheese, pasta, olive oil, salt, black pepper, salted bacon from pork cheeks). The followers of that hypothesis point out one more argument in defence of their version – the name of the dish, which in translation means ‘Coilers’ Pasta”.

This history is really romantic and somewhat typical Italian, but there is a small ‘stumbling block’ in it – until 1930 nobody had heard about this recipe. It is not even in the ’Bible of the Italian Cuisine’, which Ada Bod wrote and issued in 1930. 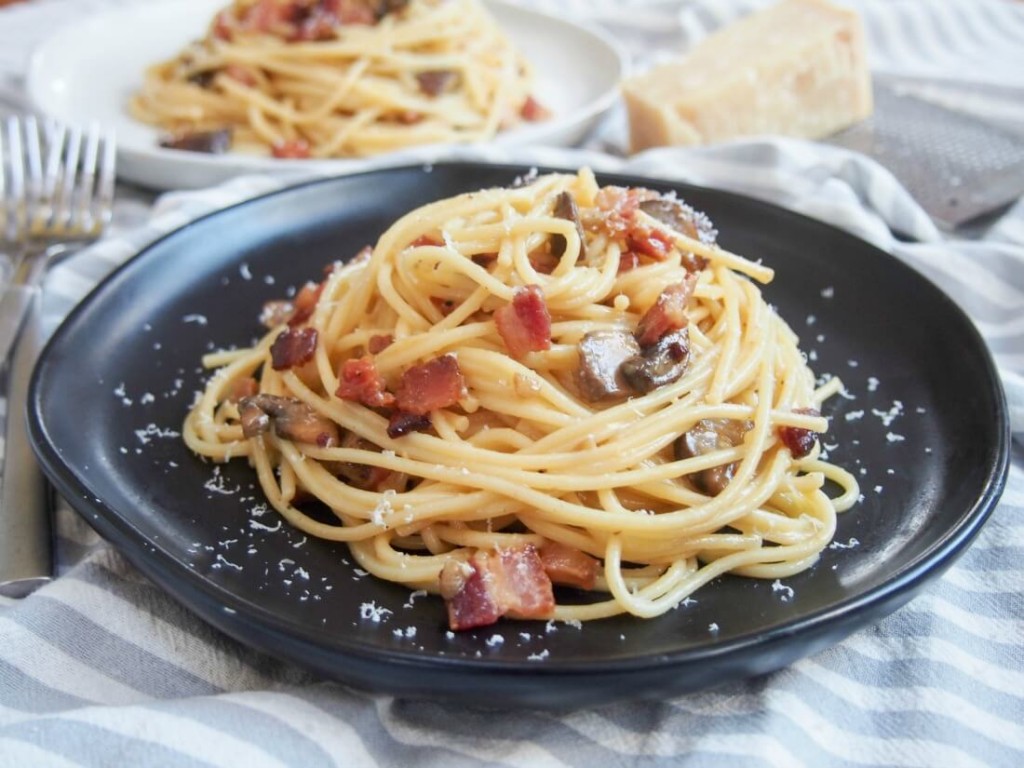 The second hypothesis claims that the pastа Alla Carbonara is a typical Neapolitan dish. In support of this theory, its followers point out the fact that in the treatise of Ippolito Cavalcanti from 1837 “Teoretico – practical cuisine” there are many Neapolitan dishes, which have the same ingredients, as the ones in the Spaghetti Carbonara.

As if this last theory sounds most credibly and if it is really true, then the Italians should say one huge “Thank you” to the American soldiers who have contributed to the creation of one of the most emblematic dishes in the Italian cuisine.

According to that theory, during the Second World War and more precisely after the liberation of Rome, the American soldiers accidentally made out the recipe of Pasta Carbonara, adding to the spaghetti, their soldiers’ rations of egg powder and bacon.

The dish proved to be very tasty; it was made with fewer products, and quickly started to gain popularity, which very soon passed beyond the boundaries of Italy; spaghetti Carbonara conquered the world with triumph.

Except for the origin of the Alla Carbonara, there are disputes about the ingredients in the recipe.

In the area of Rome, a recipe for the famous sauce Carbonara includes Guanciale (bacon from pork cheeks), eggs, cheese Pecorino Romano and black pepper.

In Northern Italy, however, in the sauce, are added cream and garlic, instead of Pecorino (which is sheep cheese from the area of Lazio), they use Parmiggiano (cow cheese).

Today there are as many variations of the Spaghetti Carbonara, as the restaurants which offer this irresistibly delicious temptation.

Therefore, we will present you two of the most popular recipes, and you can try to prepare them at home, then you can decide for yourself which variant you like more.

The spaghetti are boiled to ‘al dente’ extent.

While they are boiled, the bacon from pork cheeks is cut in strips and fried to golden (do not add fat).

The eggs are to be whipped very well, and the grated Pecorino and black pepper are added.

As soon as the spaghetti are ready-boiled, they are carefully taken out of the big saucepan and are transferred into the pan with the bacon. Some of the water into which the spaghetti were boiled, is added.  It is mixed.

After that, we must act fairly quickly…

The pan with spaghetti and the bacon is removed from the hot plate and with quick movements, the egg sauce is poured into the spaghetti. It is stirred quickly until the sauce is mixed well with the spaghetti.

The pasta is served quickly by sprinkling it with plenty of cheese and black pepper.

The other popular option for the preparation of the pasta includes cream and garlic, and is prepared the following way:

100 grams of cheese Pecorino or Parmesan

The bacon is cut into cubes and fried to golden. Shortly before it is fried, we add the finely chopped garlic in the pan and the wine.

The eggs are whipped in a bowl; the cream is added to them, and so is half of the grated cheese.

The pasta is boiled to ‘al dente’ extent, then, it is taken out of the big saucepan and transferred to the pan with the bacon. Everything is mixed well and is removed from the hot plate.  The sauce of cream and eggs is added to the pasta and stirred vigorously until the sauce sticks well to the spaghetti. It is served immediately, by sprinkling black pepper and Parmesan on each portion before that.

Wines which are matched well with the pasta Carbonara are Nebbiolo, Romagna Albana DOCG, Schioppettino.

Culprits, responsible for the promotion of this dish, which became one of the symbols of the Italian culinary tradition in the world, are the Italian immigrants in the United States, who, upon arrival in America at the beginning of the last century, started to prepare the pasta, which, they named “Spaghetti Bolognese“.

So, the pasta was so liked that it became extremely popular in the world. The name and the recipe made their reputation quickly, and today there is no restaurant, on whose menu, there is no Spaghetti Bolognese.

That is not how matters stand, in Italy, and especially in the town of the Two Towers (Bologna), that the popular sauce had taken its name from. In Bologna, this dish is considered a culinary blasphemy, as it is believed that the combination of this sauce with spaghetti from durum wheat is unpleasant and completely incorrect.

The dish in Italy is prepared with home cooked tagliatelle and the sauce is called Ragu.

Sauce Ragù – the king of the Italian sauces

The variants, in which it is proposed, vary according to the region in which it is prepared. This sauce is suitable not only for the spaghetti but also for many other Italian dishes like lasagna, even polenta.

The term Ragù comes from the French ragôut, which means “to waken”, “to stir up the appetite”. In France, this term is used for dishes, in which, one or more main ingredients are used (meat, fish, vegetables), which are cut into small pieces and cooked for a long time.

It is not clear when this term was introduced in Italy, but it is certain that the sauce was often present on the tables of the aristocrats, ever since the time of the Renaissance.

Fortunately, it is not the same with the sauce Ragu (also known by us as Bolognese), whose original recipe is recorded and stored in the Chamber of Commerce of Bologna.

The original recipe for sauce Ragù from Bologna

Then, the minced beef meat is added to the vegetables and the bacon. The ingredients are stirred so that the meat becomes in “granules”. It is prepared for several minutes at average temperature; then the hot plate temperature is reduced.

The wine and the tomato juice are added to the meat, the bacon, and the vegetables, and the sauce is left on the hot plate for 2 – 3 hours. From time to time, a little of the milk is added to the sauce. The sauce is seasoned with a little salt and black pepper.

If you brew a package of spaghetti and you add that sauce, you will get one of the most emblematic dishes of the Italian cuisine – spaghetti Bolognese.

As we promised to present you other recipes as well, here is a slightly different version of spaghetti Bolognese.

The spaghetti is boiled to ‘al dente’ (slightly hard).

The vegetables, finely cut are fried in a little butter. The bacon is added, cut into pieces. When the vegetables and the bacon are fried, the minced meat and the wine are added. The ingredients are cooked at a low temperature until the wine evaporates.

As soon as that happens, tomato juice diluted with a little water is added to the meat sauce. The peas are added, as well as a little salt and black pepper, and the sauce is allowed to cook at least for another 2 hours.

The pasta is served with grated Parmesan cheese and fresh basil leaves.