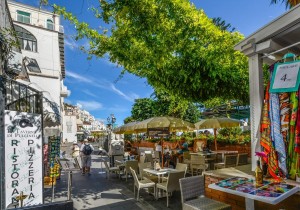 Fresh, aromatic and surprisingly simple – kissed by the Sun, the Italian cuisine is a favorite of the whole world and not by accident. With regard to the Italian dishes, a whole sea of delight can fit in a plate. Although that the preparation of these meals doesn’t require many ingredients, the Italian specialties impress with super fresh seasonal ingredients and absolutely accurate harmony of taste combinations.

It is no secret to anyone that the Italian cuisine provides an extraordinary variety of traditional and modern dishes that amaze with their taste and aroma. At the moment we think we know well the Italian cuisine and that we have tasted everything, the Italian cuisine surprises us again and again. But because of the rich regional variety of delicious specialties, when we are in Italy, it could be difficult for us to choose what to eat.

Our advice to you is to avoid the “touristic traps” type of restaurants that offer modern dishes, prepared with modifications in the traditional Italian recipes, which are intended to suit the taste of the tourists. If you are one of the people who love the authentic things and you wish to experience the real Italian culinary side of Italy, do not go to the most popular restaurants. In this case, the starting point for you are the local Italian restaurants, offering traditional dishes made by old, proven in time recipes.

Trying the local delicious foods is one of the greatest pleasures that you can experience during your travel to Italy. It would be a loss if you don’t try at least one typical Italian dish.

If you just don’t know what to try first out of the Italian cuisine, we present to your attention a list of the most delicious Italian specialties, some of which you may have already heard of: 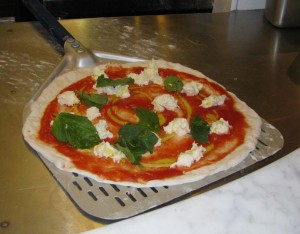 Of all the traditional dishes of the Italian cuisine, perhaps that one is the dish that combines within itself in a best way the real essence of the Italian culinary genius. And the culinary art is just that – to make a masterpiece with minimum number of ingredients.

History, simplicity, high quality ingredients – all this is the Neapolitan pizza, which is the most authentic Italian pizza.. It is created in XVIII and XIX century. Such a unique pizza you can’t order by the phone. You have to visit a small family Italian restaurant, offering authentic cuisine. The Neapolitan pizza is made of maximum 3-4 ingredients: tomatoes, mozzarella, extra virgin olive oil, fresh basil.

For an authentic Neapolitan pizza the tomatoes have to be grown on the rich soil of San Marzano sul Sarno – a town located near Naples. The flan base is made of special ingredients, kneaded by hand. Only “Mozzarella di bufala campana” should be used for the pizza, as this type is the trademark of the authentic mozzarella cheese.

The original Neapolitan pizza is baked in a wood-burning oven with two types of wood at 900 degrees for 60-90 sec. The pizza has three cooking versions, one of which is the pizza Margherita.

According to the legend, the famous Italian pizzolo (pizza master in Italy) Rafael Esposito in Brandi pizzeria has created this type of pizza in June 1889, having on it the colors of the national flag in honor of the Italian queen Margherita Savoyska, as well on the occasion of the unification of Italy.

The origin of pizza Margherita is controversial, because at the time it was created, there was already a pizza with the same topping as the Neapolitan, existing between 1796 and 1810 but under another name. 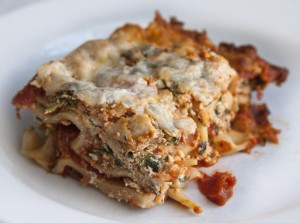 Another delicious suggestion from the yellow pages of the old Italian culinary books. It comes from the Bologna region and it is prepared according to one of the oldest lasagna recipes. For those who don‘t know, the lasagna is a dish made of layers of flat pasta, meat, sauce and cheese.

For this traditional meal there are different recipes available, but the most popular is Lasagne alla Bolognesе. It is classic and includes sauce for meat called ragout, sauce Bechamel, Parmigiano-Reggiano cheese.

The other version of the lasagna recipe is the Lasagne Napoletana (Neapolitan lasagna). It includes meatballs, salami, ricotta, mozzarella instead of Bechamel sause. Traditionally it is served in Naples during the Venetian Carnival (Carnevale di Venezia).

There is a dispute over whether the Neapolitan lasagna originates from the Middle Ages and from the Naples region, or its roots can be traced back to ancient Greece. No matter the answer to this question, one is certain – this dish is very delicious and we can’t miss it. 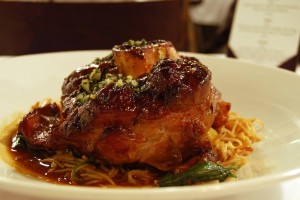 After this tasty Italian dish there is no way for you to be left hungry. As its name gives a hint, Milano is the place of origin of this specialty. Ossobuco mean literally a “bone with a hole”. It is made of cross-cut veal cutlets, stewed with different vegetables, broth and all this is boiled at slow fire in white wine.

The prepared ossobuco traditionally is garnished with Gremolata, a delicious Italian mixture of chopped spices (lemon peel, garlic, parsley and anchovy). The oldest recipe (Оssobuco in bianco) includes only bay leaf, cinnamon and gremolata. Nowadays, osbucco is prepared in two ways: one that includes tomatoes, and the second one, which is traditional, that doesn’t include tomatoes.

The modern recipe contains also carrots, onion, celery, and instead of veal you can use pork meat. It is believed that the traditional recipe most probably occurred in XIX century, in one of the osterias near Milan. It can also be served with Milanese risotto or polenta. 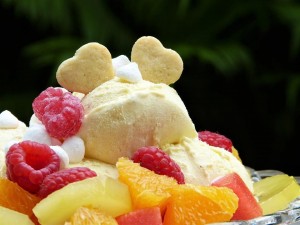 What to do when the weather is warm and we are in Italy? Yes, you are right – we will eat gelato! Not any type of gelato, but the gelato made by the original recipe. The story of the popular summer dessert, melting in the mouth, starts from the Renaissance period, but actually there is no evidence yet regarding who invented the ice cream.

The Italians may not be the original creators of this icy temptation, but they have definitely contributed for the improvement of the original recipe and have made it the masterpiece that it is today.

Legends tell that the gelato recipe was first created in the royal courtyard of the Medici family in Florence. The original creator is either the Florentine architect and designer Bernardo Buontalenti or the royal alchemist Cosimo Ruggeri.

Some people say that the ice-cold pleasure first appeared in Sicily, ancient Rome and Egypt, as it is reported that for the first time frozen desserts are being made there. The ice for this desserts have been collected from the high mountain slopes and it was preserved underground.

Nowadays, in Italy there are more than 37 000 gelaterias, but according to the Italians one of the best ones are in Rome, Bologna and Florence, where you can try a masterfully made gelato.

Gelato makers prepare it in a different way compared to the preparation method of the classic ice cream. Gelato contains less fats, it has a thicker consistency, strong aroma, and entirely natural ingredients.

When breaking down its creamy structure, less air enters inside, so gelato can be stored at a higher temperature compared to the normal ice cream. It can be served in all ways, just like the traditional ice cream: in a bowl, as a cone, on a stick, as a sandwich, as a cake or a pie.

It is well known that there is a law in Italy requiring gelato to contain a minimum percentage of fats – 3.5%, compared to America where the requirement for fat content of the gelato is 10%. 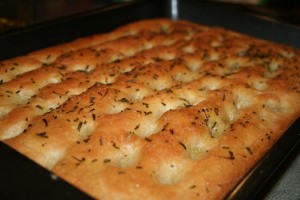 This delicious paste dish is of the traditional Ligurian cuisine, but it is popular throughout Italy.  The focaccia is one of the most tasty Italian paste products. It is a thin bread with a topping of fresh herbs, vegetables such as garlic, tomatoes, basil, caramelized onion. It may contain cheese filling.

In Italy the Latin name panis focacius means focaccia, and it is a flat bread baked in an oven and it comes from ancient Rome. There is evidence that the main recipe for such bread was first discovered by the ancient Etruscan people, but later became part of the Ligurian culinary.

In Italy, there are countless variations of the focaccia recipe. The classic focaccia recipe is named focaccia alla Genovese or fugassa. It is prepared traditionally in the region of Genoa and the Italian Riviera, and it is considered that in these regions the most delicious focaccia is made.

It is also popular with the name focaccia al rosmarino, and such focaccia is made with rosemary and it is often served as antipasti, as a sandwich or just a slice of table bread. 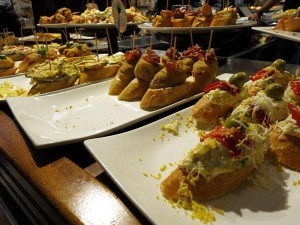 You can eat Ciccheti in any traditional wine bar or a ciccheti bar in Venice. Ciccheti bars, also called osteria or bacari, serve mainly cold starters such as ciccheti.

They are small slices of bread or polenta, covered with different ingredients such as artichoke hearts, cream of Atlantic Cod, and spices named baccalà mantecato. Ciccheti are traditionally served with ombra (a small glass of wine), the Italian name of which means “a shadow”. Ciccheti are served as small sandwiches with olives, hard boiled eggs, meats, seafood.

They can be served on sticks and consumed with fingers. They look like the Spanish tapas, which are also served as hors d’oeuvres. Everyone can make for himself a whole dish of different ciccheti. They have become a symbol of the Venetian social life. The Venetians, as well the tourists, eat ciccheti for brunch, for lunch or as an afternoon snack. 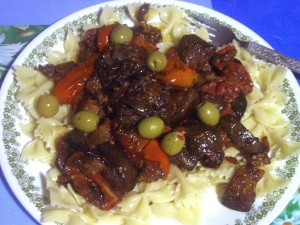 This dish is part of the Sicilian cuisine, which is a colorful mix of the Greek, Arabic and Spanish cuisine, and their influence has not only affected the Italian history but also the Italian culinary.

Caponata is a vegetable dish made of eggplant, accompanied by capers, onion, celery, and it may also contain raisins, olives, cedar nuts, even octopus meat. The meal has sweet and sour taste, and this makes it a great vegetarian option. There is no single Caponata recipe, every Italian restaurant has its own.