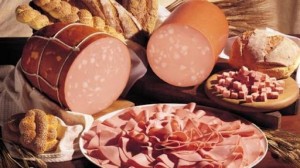 The meat in Italian cuisine and the Italian sausages 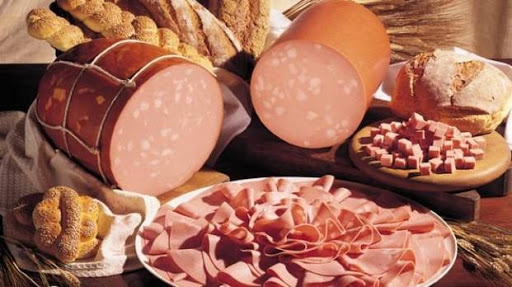 Today, however, we are not going to talk about our favorite pasta, pizza and lasagna. We won’t talk about the great cheese and wines of Italy, but for something also delicious and emblematic for the Italian cuisine. 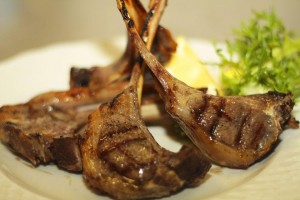 The meat and sausages in Italian cuisine

The Italian cuisine is extremely rich and includes a wide variety of meat dishes, which are prepared with different types of meat and fresh seasonal vegetables. And the sausages… oh, the Italian sausages are so incredibly delicious that their taste qualities can hardly be described, if you haven’t tried them.

The types of meat used for preparation of the dishes in the Italian cuisine, to a large extent depend on what animals are bred in the respective region, but generally include veal, beef, lamb, goat, pork, horse, chicken, duck, turkey and wild game (rabbit, pheasant, wild pig, partridge, quail, snipe and other).

The heat treatment that the meat undergoes is different, but most often the meat is boiled, baked, fried or grilled.

We have already mentioned that in every area of Italy there are one or two kinds of meat that dominate in the preparation of significant number of dishes… In the Lazio region, for example, the meat that most often is present on the table is the lean lamb, and precisely in this region you will be able to taste the widest variety of lamb dishes. Very popular (and easy to prepare) recipe of the Lazio region is the Abbacchio e scottadito or tender lamb chops.

The recipe for this delicious Easter dish is not time consuming and it is easy even for people who are not very good at the kitchen.

In order to prepare Abbacchio e scottadito you will need:

The chops have to marinated in the listed spices for about 30 minutes.

In a deep frying pan you have to heat up a little portion of oil and each chop have to be cooked on both sides for about 2 minutes (until the color becomes golden). The tender lamb chops have to be consumed hot and with hands.

The Lombardy region, and in particular the Milan province, is famous with its numerous recipes that include mainly veal meat, and the most popular meat recipe in the Italian cuisine is the famous Milanese chop.

If the chops are thick you have to thin them just a little with the help of a wooden meat hammer. Then beat up the eggs (if you like you can add some black pepper). The chops have to be put in the eggs and afterwards well rolled in the bread-crumbs.

Heat up the butter in the pan, then fry the chops on both sides for about 2 – 3 minutes.

The dish can be served with Saffron rice or fresh vegetables.

Whether the meat in the Italian cuisine is veal, lamb, chicken, pork or wild game doesn’t really matter, because the dishes that the Italians prepare with meat are always incredibly delicious and aromatic.

We can go on endlessly with recipes, but since our time is limited, we will put our focus on the other favorite product of all Italians, the main ingredient of which is also meat – the Italian sausages. 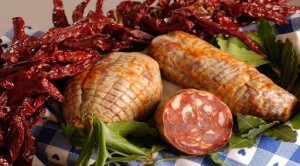 The sausages – the gastronomic unifier of Italy

Do you know what brings together Northern and Southern Italy? No, it is not Garibaldi! In fact, long before becoming the country we know today, Italy had one common gastronomic unifier such as the sausages that united it.

They were first created as a way of preserving meat and a good opportunity to use almost everything from the animal, today every region of the country has its own specific recipes for sausage making that is proud of.

The technologies under which these meat products are prepared are different, as the meat from which they are produced is mostly pork, but there are varieties that are made of veal, wild game, horse, lamb and other types of meat.

No matter the type of meat they are prepare of, a huge role for the great taste of the Italian sausages have the spices that they contain. You can always tell which sausages are from the Italian north, because the southern sausages are much more spicier compared to the meat products that are produced in Northern Italy.

The classification of the sausages in Italy is quite complex, because it depends on whether they are made of whole meat pieces or minced meat in a wrapper.  Moreover, they are divided according to the method of preparing:

Popular sausages in the Italian cuisine

Bresaola is the only Italian meat product made from beef only. It is prepared from a whole piece of meat, from the femoral part of the animal, that is rolled (soiled) in garlic, cinnamon, bay leaf and clove. In this mixture the beef leg has to stay for about 2 weeks, and after that period it have to be placed in special premises where a process of maturation takes place, the duration of which is from 1 to 3 months at temperature of 12 – 18 degrees.

The end product has a bright red color and thin, slightly spicy flavor, varying from moderately salty to sweet. The structure of the sausage is soft and compact, and since the meat from which it is produced is pure veil, it has no fats.

Salsichcha (Salsiccia, Zazìcchiu, Calabrian sausage) is a popular type of sausage, typical for many areas of Italy. The recipe and the type of meat used for its preparation, depend on the region where the sausage is made.

The sausage can be made from pork, turkey, lamb and offal (liver, lungs and so on). The spices most commonly used in Sauzìzza are salt, black pepper, garlic, wine, red pepper, dill seeds. The meat is not finely minced, and the wrapping is natural.

There are some varieties such as Salsiccia Stagionata that undergo a drying process, while other like Salsiccia Fresca are offered raw.

The raw sausage can be fried or cooked and can be consumed with croutons and extra virgin olive oil or with polenta.

Ventricina is a sausage typical for the region between Abruzzo and Molise. There are two main varieties:

Ventricina del Vastese has 80% pork meat and 20% fats. The product is different from other products with the fact that the raw materials are not finely minced, like in most sausages, but they are cut in pieces with sizes from 2 – 4 cm. The meat is rolled in sweet peppers, chili, rosemary and salt. Some varieties have added orange peel or bread.

The sausage is filled in the intestines or the stomach of a pork and undergoes a maturation process with duration of about 120 days. After cutting, the Ventricina has a red color, and its flavor is spicy. This meat product is consumed as antipasti, in slices or as main ingredient for sandwiches.

Ventricina teramana is characterized by a higher fat content (60 – 70%). It may contain offal. The raw materials in it are well minced, its color is even pink, and its taste – slightly smoky and spicy. This type of sausage is the ideal base for the preparation of meat sauces and for sandwiches.

This sausage is the pride of Umbria, and the tradition in its production is almost as old as the world. The sausage is made mainly from pork or wild game meat. The spices that are put in it are many, and its shape is round and quite specific.

There is a „dry” and fresh version of this product, as the fresh version is excellent for grilling, as well for preparing a stew or for enriching mushroom sauce or lentil soup.

Pancetta is a traditional Italian product that actually resembles bacon. For the preparation of the sausage are used pork breasts rolled in salt and spices, such as sage or rosemary.

The shape of the sausage varies depending on the type. For example, pancetta tesa is available in large square pieces, while pancetta arrotolata has the shape of a roll.

When cut the color of Pancetta is pink – white, and the flavor depends on the spices that are put in the sausage. Pancetta Piacentina and Pancetta di Calabria иhave a category DOP.

Cut into cubes or slices, Pancetta is consumed as a cold breakfast or added in sauces, soups, garnish, pizza, pasta and so on.

Here is one easy recipe for pasta with sausage and Pancetta

In a pan with extra virgin olive oil have to be fried the onion, Pancetta and the sausage. Add the tomato paste and the sauce have to be cooked for a few more minutes.

Boil the spaghetti, then drain them from the water and add them to the pan with the sauce. Stir well. The dish is served warm and with grated cheese Pecorino.

The Mortadella is a well-known sausage and it is loved by many people around the world. It is produced mainly in Northern and Central Italy and in particular in Bologna. For the production of this product is also used the most popular type of meat in the Italian cuisine for the sausage production, with finely minced pork meat, with added to it olives, peppers and spices, such as white, black and red pepper, salt, nutmeg and coriander. This mixture is filled in the appropriate wrappings and the sausage is put in large ovens with dry hot air, in order to undergo thermal treatment.

The shape of the ready Mortadella is cylindrical, when cut the color is even pink, with fine impregnations of white fats. The aroma is spicy, the taste is thick and well balanced.

Mortadella Bologna and Mortadella di Prato refer to products with quality mark IGP. Mortadella is served cut into piecesе (in combination with bread) or in cubes (as light breakfast). It is used in many Italian recipes for pizza, and in some recipes (prepared outside Bologna of course) it is used for the preparation of the Bolognese sauce.

Prosciutto is a typical Italian ham that is made from a pork leg, which is marinated and stored under specific conditions. For the preparation of the ham is used the meat of pigs that are bred in special farms, fed with the waste of the production of Parmigiano.

The main ingredients for the production of Prosciutto are pork meat, salt and time. The drying process continues for 8 to 16 months (some varieties mature for 2 years). Prosciutto has the typical form of a pork leg. The color of the cut is pink – red, and the taste – mild, slightly salty.

The most popular types of ham are DOP

The delicacy can be consumed into thin slices, it goes well with fruits, cheese and figs. Very often Prosciutto is used as appetizer for salads, pizza, pasta or other dishes.