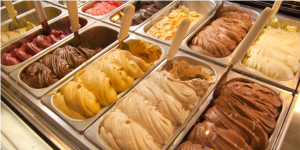 According to most travelers who are fond of sweet temptations, Italian gelato is the best ice cream in the world. There is no way you can go to Venice, Florence, Rome, Naples or any smaller town of Botusha and not taste the unique cold pleasure. It’s like not eating pizza or pasta.

Italian ice cream gives a nice chill in the summer days and evenings and is also an excellent complement to coffee. Actually, gelato is not a seasonal dessert, it can be consumed throughout the months of the year.

If you are in Italy, you must visit at least once a traditional ice cream shop to immerse yourself in the realm of ice cream. True masters prepare the gel by hand according to their recipes, giving it a unique taste.

What does Italian ice cream contain?

The popular Italian frozen dessert is usually made from milk with 3.25% fat and sugar. More eggs and cream are now often used. It is generally lower in fat than other ice creams.

Gelato usually contains 70% less air and more aromas than other types of frozen desserts, which gives it a density and rich taste that sets it apart from competitive ice creams. Its higher density is due to the fact that it is mixed at a much slower speed.

Real Italian ice cream is made only with fresh produce and without any preservatives. The gelato is served at a slightly higher temperature than other ice creams, so its texture remains softer and creamy. The finished product is stored in a chamber at minus 18 degrees to ensure the correct structure and durability of the ice cream. 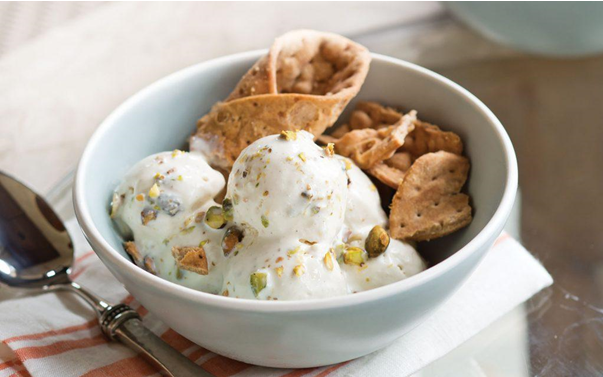 As usual, when looking for the roots and homeland of a culinary star, we come across at least two legends about the origin of ice cream. It is widely accepted that the great traveler Marco Polo brought the recipe from China.

Others look for the start of ice cream not so far from present-day Italy and cite data that Roman emperors were big fans of dessert made with fruit and ice or frozen snow.

At the end of the 16th century, the Medici family commissioned the famous painter and architect Bernardo Buontalenti to prepare a beautiful feast for the arrival of the King of Spain in Florence. Using his culinary skills, the master welcomed his majesty with a magnificent creamy frosting. He prepared what we now call the gelato. That’s why Buontalenti is considered the inventor of Italian ice cream.

The popularity of the jelly in its modern form has been attributed to Italian chef Francesco Procopio del Colteli, who emigrated to France from Palermo. In 1686 he opened the Cafe Prokop in Paris and introduced jelly to his cafe, earning many admirers for the ice dessert first in Paris and then in the rest of Europe.

Thanks to his gelato, Procopio not only obtained French citizenship, but also received an exclusive royal license issued by King Sun Louis XIV, which made him the only producer of frozen dessert in the kingdom at the time.

1884 is considered the year of the start of mass sales of ice cream in Italy. With the advent of modern freezers, a new era of industrial production begins. But even today, the original and the most delicious Italian ice cream are handmade in special establishments – jellies. The dessert in them is prepared in small portions and with various flavors, in order to provide customers with a fresh product.

Nowadays jelly is well known worldwide, and Italy is the only country where the market share of artisanal ice cream over mass produced is over 55%, with more than 15,000 people working in over 5000 modern Italian ice cream parlors. 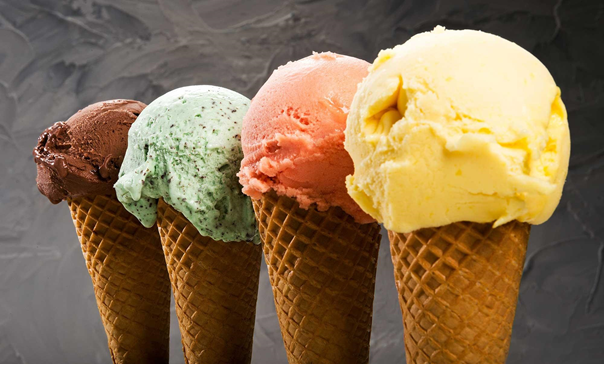 Italians say that authentic gelato is made only with milk and sugar. In addition to milk ingredients and sometimes eggs, it is often added to the mixture fruit or fruit puree, spices or nuts. The additional ingredients determine the type of ice cream. It is estimated that the varieties of Italian ice dessert are over 200.

The traditional aromatic additives for gelato are vanilla, chocolate, hazelnut, pistachios, almonds, cream, coffee, strata. There are various types of cold dessert with milk-cream base with fruits.

The variety is very large here – raspberries, strawberries, blueberries, apples, lemons, bananas, pineapples and all other seasonal fruits. If you make ice cream at home and use fruit, it must be fully ripe. You can use frozen fruit, which is better than fresh but not ripe.

Other interesting varieties of gelato are yogurt, salted caramel, cream with bits of brownie, coconut. There are also many variants of gelato sweets, such as tiramisu, apple pie, cheesecake, caramel cream and more.

And with this sweet temptation can not pass without lemongrass – ice cream with the most famous Italian liqueur. There are other ice cream flavors – with whiskey, rum or champagne.

In order to enjoy the pleasure of many places, jelly is available in freshly baked cones. Different types of toppings and orders can be added to it. 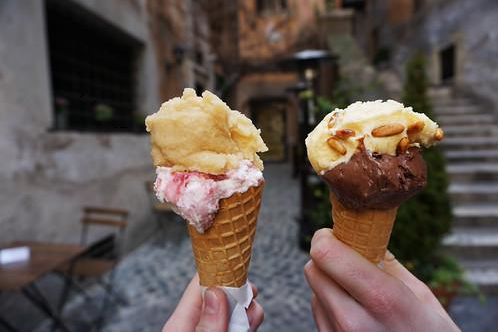 For people who follow special eating regimens, sugar-free gelato is produced, suitable for diabetics or vegan gelato based on hazelnut, coconut, pistachio and others.

Lovers of weird tastes can choose between bread-flavored ice creams, pesto genie or even the famous Tuscan Lardo di Colona bacon. Another gastronomic surprise is a Parmesan, ham or popular Mortadella Italian jelly For fans of the unconventional flavor combination, is a Japanese with wasabi spice.

In a thick-bottomed pan over low heat mix milk and cream. Stir occasionally until bubbles form on the surface of the mixture and then remove from the stove.

In a bowl, preferably metal, beat the yolks by hand or with a mixer, gradually adding the sugar. The mixture should be thick and light yellow in color. To the whipped yolks, slowly add the milk-cream mixture and leave on low heat for about 5 to 7 minutes, stirring.

Finally add the grated lemon peel and lemon juice. Strain the resulting cream through a fine filter. Then cool it by placing the pan in ice water and do not stop stirring to prevent lumps.

Pour the cream into a clean plastic container with a lid and freeze for at least 3 hours before serving. Garnish with lemon slices or spirals.

Remove the eggs from the refrigerator and let them stand at room temperature. Separate the yolks from the proteins. Beat the yolks with sugar using a mixer until whitened.

Put the milk and cream in a thick saucepan and heat over low heat. Slowly add the beaten egg yolks to them, stirring constantly.

After a few minutes, add the liquid chocolate. Stir well. Leave the mixture on the stove for about 10 minutes until it thickens.

Remove from the hotplate and pass the mixture through a large strainer or sieve. Transfer to a freezer-safe container and, after cooling to room temperature, place it in the freezer.

For the first 3-4 hours, remove the ice cream and stir it, then allow it to stand for several hours. When the gelato is ready, serve it sprinkled with grated natural chocolate or crushed almonds or hazelnuts.

You can make kisses from the other proteins. 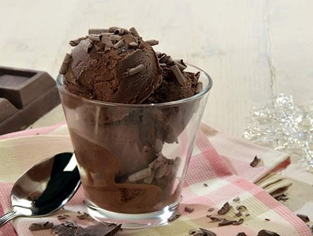