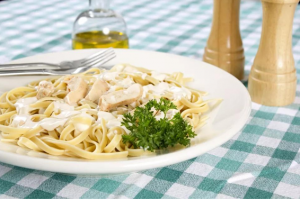 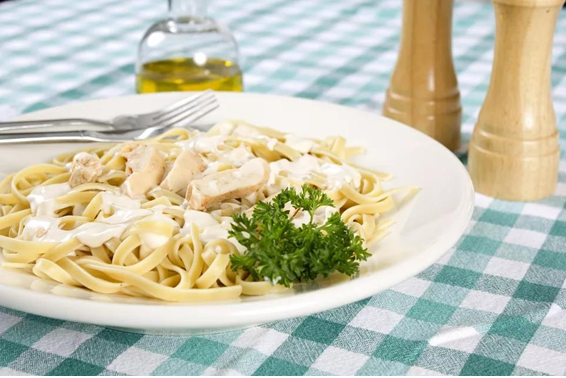 Most lovers of Mediterranean cuisine distinguish spaghetti, tagliatelle, lasagna, ravioli and a few more, but among the first to think of will probably not be fettuccine. However, they have their rightful place in the culinary tradition of Botusha. Italian fettuccine is consumed not only in their homeland, but also in many other places around the world. 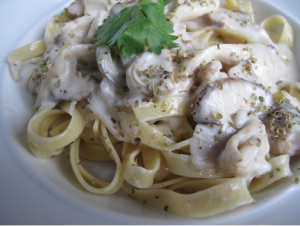 What are fettuccine and how are they prepared?

Fettuccine are thin flat strips of dough about 7 mm wide. They are similar to tagliatelle, from which they differ only in their greater width. Italian Fettuccine (from fettuccia – ribbon) are one of the types Italian pasta, which are especially popular in Rome. 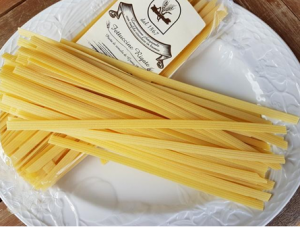 One of the most famous dishes using this type of pasta is fettuccine Alfredo. The popularity of this dish has led to the wider distribution of fettuccine and they are becoming popular abroad.

The preparation of fettuccine in Italy begins with the kneading of elastic dough, but nowadays the hosts have the opportunity to buy ready-made dry pasta.

For Italians cooking pasta is a real ritual, which on the one hand obeys strict rules for cooking, and on the other – requires a creative approach to the products and spices and especially to sauces.

Today you can find dozens of recipes for cooking and serving Italian fettuccine: for example with ham, mushrooms, chicken fillet, fish and seafood and other products. But fettuccine acquires its special charm in combination with various sauces.

The question always arises how to cook fettuccine or another type of pasta to make them perfect. The first rule is to boil in plenty of water, as the recommendation of experienced cooks is to observe the ratio of one liter of water to fall 100 grams of dry pasta.

There is no way not to add salt, which is added shortly before the water boils. The proportion is to add 7 grams of salt to each liter of water, but this is very conditional, because everyone has a different taste. In our country, many housewives think that you need to put a little oil in the water so that the pasta does not stick together.

This is not correct, because if the pasta is of good quality, it will not stick, and the oil will rather make the surface of the fettuccine in our case “slippery” and the sauce will settle to the bottom of the plate instead of sticking to them.

The masters of Italian cuisine say that the pasta should never be rinsed after cooking, because the water washes away the surface layer of starch, which must stick to the sauce when serving.

And the most important rule of Italian chefs is to boil the pasta “al dente”. This literally means “to the tooth” or more clearly to be slightly hard to chew in the middle.

It is well known that the tastier the sauce itself, the more appetizing the finished dish. The ideal way to prepare it is to transfer the pasta briefly to the saucepan after cooking to absorb its flavors and aromas.

Each type of pasta has different types of suitable sauces. For example, a short pasta like foam goes best with pieces of meat and vegetable-based sauce.

Fettuccine is good to combine with rich-tasting butter and cream sauces. With this type of pasta, as with most of the others, you can prepare Italian classic brands Carbonara and Bolognese.  Various meats, vegetables and spices can be added.

The most famous fettuccine dish, called Alfredo, can be considered both Italian and American. The original recipe of the restaurateur Alfredo is a common way of making pasta in Italy, called burro e parmigiano, which literally means “parmesan butter”.

There is nothing special about making pasta with cheese, but the Italian chef’s invention is the addition of double the amount of butter to the sauce. It is said that he invented this novelty in honor of his beloved wife, who was pregnant at the time.

American tourists in Rome were impressed by the vivid taste of this seemingly unpretentious combination of ingredients and called the dish fetuccini Alfredo. They took the recipe home, but over time it changed abroad.

Cream, béchamel sauce, broccoli, shrimp, mushrooms, chicken were added. None of these combinations, however, came close to the popularity of the simple and incredibly tasty version of Alfredo, which was a 3-ingredient paste made from time Italian culinary classic dishes.

That’s why now most chefs stick to the original as usual in addition to the fettuccine themselves, butter, cream and parmesan are added to the sauce. Season with black pepper. 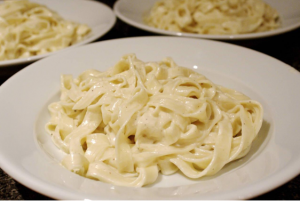 Fettuccine with chicken and cream sauce

Cut the chicken meat into juliennes / strips / or into pieces and fry it in a little olive oil. After removing the finished meat, put the cream in the same pan and season with salt and pepper.

After boiling the sauce, let it simmer for only three minutes and remove from the heat. It’s time to cook the fettuccine according to the instructions on the package, but be careful not to boil them. Squeeze out the cooked pasta spread on a plate, put the chicken pieces on top, and finally pour the cream sauce.

Fry the finely chopped onion in the heated olive oil. Add the diced bacon and fry until golden. Put the cream and reduce the heat, so that the dish simmers very lightly.

Add the yolks and stir immediately for no more than a minute. Pour the cooked fettuccine into the hot sauce, to simmer a little more. When serving, sprinkle with Parmesan cheese. 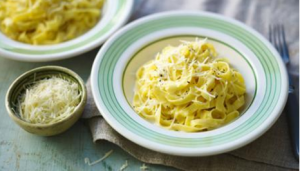 Boil the pasta by putting it in boiling salted water. Cook for about ten minutes and follow the instructions on the package.

Melt the butter in a deep frying pan and add the cream to it. Season with salt and pepper and stir. Turn off the heat and add the grated Parmesan cheese to the sauce.

Transfer the drained spaghetti to the sauce pan and mix thoroughly until the products are well mixed and the fettuccine absorbs all the aromas and flavors. Distribute in a plate and sprinkle a little more Parmesan on top.