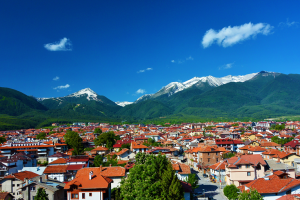 The cuisine of Bansko 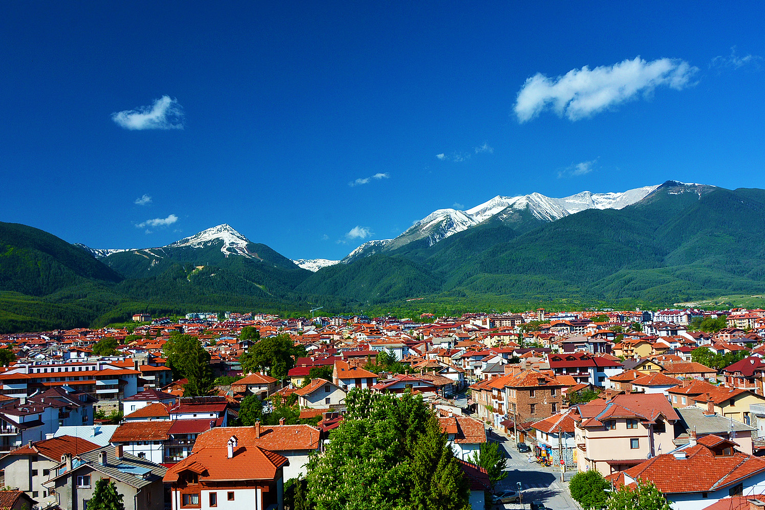 From time immemorial, the town of Bansko, known today as a resort town, has been one of the economic and cultural centers in the Blagoevgrad region. The town nowadays will impress you with its antique roots, its colorful dialect and its rich folklore heritage as well as its unique local traditional cuisine.

Bansko is relatively close to our borders with our southern neighbors Greece and Turkey. Moreover, in the past, local traders traveled everywhere and brought to Bansko the influence of the Great Powers and the other Western European countries. The geographical contact and communication of the town with other regions and countries have also affected in its cultural and culinary heritage.

After all these centuries and historical changes Bansko has managed to preserve its culinary wonders. Today, in the streets, the famous recipes of the past are easily accessible in their authentic form to all tourists arriving from all over the world to try them out.

The cuisine here is representative of the region, but it also has its unique features that you will definitely remember. Traditionally, the residents of Bansko are master stock-breeders. Pigs in the region grow big and healthy.

There are also wonderful conditions for the cattle, thanks to which the dairy products here are at a particularly high level – here the fresh milk and yoghurt, the homemade cheeses and the yellow cheeses, the cottage cheese, the qatiq, etc. are not only very delicious (in the local language of Bansko – “Good”) but also have a number of beneficial effects on human health. 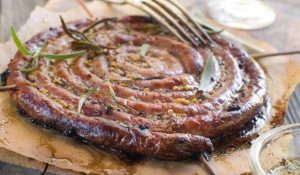 Meat and sausages of Bansko

Local residents of Bansko especially love to eat a lot of meat to cope with the long winter season and harsher conditions in the mountain. It is precisely the high altitude and the predominantly low temperatures that provide the ideal conditions for the production of a number of dried meat delicacies that have become the emblems of the town and the region.

The favorite spices (according to the Bansko dialect – “merizmi”) of the locals are forest cumin, allspice, savory, black pepper and many others. These magical scents give the sausages even more irresistible and unique for Bansko taste.

Hardly anyone would argue that the Bansko cuisine is most popular with a pair of raw-dried sausages called the Banski starets and the Banski Babek. Both are made from pork meat – fillet, and bacon (the so-called“dropka”), seasoned with the characteristic black pepper and cumin – both regular and crushed. Do not let their names mislead you – for these sausage, tradition requires the hostess to use the finest meat that she has access to.

The difference between these two sausages is that the products for the Banski starets are chopped in larger pieces, and for his tender mate, the babek, are cut in smaller pieces. The meat is not minced for neither of the sausages. Besides, the babek is filled in the gut of the animal, and the starets is filled in his stomach (belly).

Banski flat-sausage is another raw-dried delicacy, a favorite of local gourmets. Prepared from pork and beef in a ratio of 70 to 30 and seasoned with a splendid bouquet of traditional Bulgarian herbs, the flat-sausage has a superb taste. It also participates in the recipe for the popular for the town – kapama, which includes at least three types of meat – pork, chicken, veal, even rabbit.

Near Bansko, in the village of Gorno Draglishte, another traditional pork sausage is produced. This is the so-called “nafpavok”, which has gained increasing popularity in recent years among the fans of gourmet and traditional cuisine all over the country. Since Gorno Draglishte is located in relatively close proximity to the town of Razlog, and the recipe with some variations is also found in other villages, one can argue about the origin of the dish. 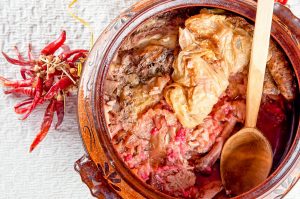 The products are placed in layers in this clay pot for both the legendary Banska kapama and the no less emblematic banski chomlek. Chomlek is usually made from pork or veal, most commonly knuckle or meat in combination with a knuckle. It has been a favorite dish of the people in Bansko for centuries, especially for festive dinners on various occasions.

The meat is cooked with potatoes and chopped onions, and the specific moment is that to it is added a rather solid amount of wine. Many dishes of the Bansko cuisine take a lot of time to cook and the chomlek is one of them – to prepare it, the dish needs to be baked for about 3 hours, but that’s nothing! The traditional Banska kapama is stewed between 7 and 10 hours.

Katino Meze is a delicacy from the culinary tradition of the town of Bansko. It is prepared with two types of meat – veal and pork, which are stewed with a little mushroom and white wine. The characteristic spice for the katino meze is parsley.

People of Bansko are admirers of the home-made bloody pudding/karvavitza/, which they season with dill, red pepper, cumin and leeks. “The secret ingredient” is the special traditional Bansko spice – thyme. Others prepare the bloody-pudding, flavoring it with spearmint, cumin, savory and … surprisingly for some, anise!

Typical dish of the area is the so-called “kombari with kazhel“. “Kombari” means potatoes, and kazhel “sour cabbage”. Red dry peppers are also added to the products.

Pastry products are extremely popular and deeply laid in the Bulgarian cuisine and have been developed and enriched over the years. They have always been present in our history and traditions and have long been the symbol of bread, grain, fertility and hard work, thanks to which the Bulgarian has for centuries supplied food to his table. It is not by chance that one of our national traditions has been preserved to the present day – to welcome important guests at the entrance with a freshly baked bread with salt, colorful salt and honey.

One of the most typical home-made pastry for the Razlog area and the region of Bansko is the shupla. It is like a salt cake made from eggs, yoghurt, cow butter, flour and crumbled cheese that can be eaten for breakfast. Shupla is prepared also in other places in the Blagoevgrad region, as well as in parts of Pazardzhik (Velingrad), but the taste of the Bansko‘s shupla is really unique.

Fudula – also a pastry product, consisting of two thick homemade pastry sheets and stuffing between them. The dough for the fudula is mixed with bread yeast. In principle, a ready-made dough can be used bought from the store, but in this way much of the charm of this traditional breakfast will be lost. The filling for fudula can be a mixture of cow’s cheese and eggs, but most often in Bansko it is prepared with bacon or flat-sausage according to the local recipe.

Another wonderful recipe for a pastry made from the Bansko area, suitable for the first meal in the morning, is the local so-called “poparnik”. It is known in the Bulgarian cuisine under different names in each region, such as tutmanik, kneaded cake with cheese, snails cake, milinka, mesenitsa, and so on.

The poparnik is made with a yeast for bread, which is previously dissolved in a little water with one teaspoon of sugar, and water and an egg are added to the dough. Using a spoon, make a well in the prepared flour and pour the products for the dough in it.

After the initial stirring, the dough is hand mixed and divided into 5, 7, 10 or more balls. For filling, mix 100 g of butter, 200 g of cheese and 200 g of lard. The dough is prepared in a pastry sheet that is stuffed and rolled. In the tray smeared with plant oil are placed all the rolls, then they are covered with a clean cloth (sukman) or other cloth and left to rise (enlarge) by choosing the warmest place in the room – in winter it is possible for the purpose to use a slightly heated oven. Bake it at 200 degrees Celsius.

People in Bansko call the polenta „barkada“ (or „burkada“). According to the local recipe, it is usually prepared with a mix of white cheese and bacon, meat pieces or curry, a mixture of beef and veal.

The kidney beans or beans, as we are accustomed to call this legume that is so popular in the Bulgarian cuisine, have a pretty bizarre name in the authentic local dialect in Bansko – namely, “kostureta”. This, however, does not have a negative effect, as everywhere in Bulgaria, and it takes an honorable place among the traditional local recipes.

In the area of ​​Bansko are grown many different varieties of kostureta, in which the grains and the bean pods vary in color and in size. For the typical Bansko beans, prepared with the participation of beets – according to the local dialect – “chekane”, and bacon, it is best to use the variety of red-colored kostureta.

One of the most famous desserts in the town of Bansko is called kukurini. People say the recipe for them is brought from Vienna. These are fried homemade dough pies, which have the form of ribbons.

Another favorite dessert of Banskali is the borek. This is a wonderful recipe with a pumpkin that is very popular in the region. It is available in a number of restaurants, especially in the pumpkin season, but because it is very simple, easy to made and affordable, each of us can prepare it at home. For the Bulgarians from other regions, the borek resembles something like a pumpkin pie, which consists only of stuffing, because no pastry sheets are used for its preparation. In the recipe for the borek there are a few products that are available on the market, at an affordable price – pumpkin, sugar, crushed walnuts, oil and about a kilogram of flour type 500.