Appetizers in the Italian cuisine

Every national cuisine has its own way to stimulate the appetite for the main dishes. Traditionally in our cuisine, cold appetizers, salads or relishes are offered before the main dishes, together with beer or brandy. In Italy however, before lunch and especially before dinner are offered starters called ‘antipasti’ to which the Italians add a glass of local wine or ‘spritz’.

There is hardly anyone who doesn’t know what the appetizers are, but still, if there is someone, we will say that “appetizers” are the food that stimulates the appetite and prepares us for the main dish that follows.

We mentioned that every national cuisine offers similar food to stimulate appetite, but as our topic is the “Italian cuisine appetizers” we are going to talk a little more extensively about the Italian cuisine and the famous antipasti without which the culinary tradition of Italy would not be what it is.

History and Origin of the appetizers (antipasti)

The tradition of offering antipasti before the main dish originates from ancient Rome, as evidenced by texts that are found, mentioning “gustatio” (vegetable appetizers and sauces offered as a ‘prelude’ to the main meat meals).

Even Cicero had written about these appetizers calling them the “promulsisa” referring to the custom of drinking wine and honey which the Romans called the “mulsis”, during the great banquets in ancient Rome.

In the Middle Ages, the tradition of serving and consuming the antipasti sank into oblivion, and during the great holidays and gatherings, people started directly with the main dish.

The antipasti tradition was revived in the 16th century, and during this period, Pellegrino Arthussi (the father of the Italian gastronomy) wrote in his writings perhaps the first definition of appetizer:

Today in the Italian cuisine, appetizers are offered not only during great banquets, but they are an integral part of the Italian national cuisine.

The development that they went through over the centuries was enormous. The change had been made both because of upgrading in the customers’ tastes and also, because of the vast variety of antipasti recipes that have been offered. The choice is really great: from recipes based on fish, meat, cheese, vegetables to the various cooking techniques (fried, baked, raw, cooked) and various tastes (salty, sweet, pungent, intense).

In addition, the fact that in each region in Italy the different appetizers are prepared in a different way and with the specific regional ingredients, it becomes rather difficult to say which are the most frequently-prepared and the most popular Italian starters.

Stretching to the Alps, Northern Italy is famous for its creamier appetizers, which are prepared from the delicious dairy products that are produced on the hills and pastures of this part of the country.

Another distinguishing feature of the Northern Italian appetizers is the use of fresh herbs, bacon, dry-cured meat and vegetables.

While the northern region is famous for its dairy products, Central Italy is an area known for its variety of smoked meat, seafood, cheese and, of course, rich, aromatic sauces.

Central Italy is blessed with a variety of food from the sea and the earth, so it is not surprising that in this part of the country the most popular starters in the Italian cuisine are of seafood, meat and cheese, prosciutto, salami, smoked salmon and fresh spices.

In this region, the traditional Italian and Mediterranean cuisines are in ‘symbiosis’, so the appetizers typical of Southern Italy most often include fresh tomatoes and herbs combined with creamy kind of cheese and a variety of fresh seafood.

This perhaps is the most renowned and popular appetizer in the Italian cuisine.

In a bowl put the tomatoes cut into small cubes and the garlic cut into slices. Add all other herbs and spices to them. Mix everything well.

The bread slices are toasted to obtain golden colour.

Put of the mixture on each slice (brochette) and the antipasti are ready for consumption. 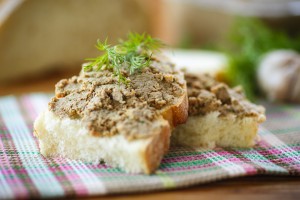 Chicken liver is washed and dried well. The onion and the capers are fried until they are ready. Once the onion becomes a golden colour, the liver and the wine are added. The antipasto is allowed to boil for another 20 minutes.

Once it has been removed from the cooker and has cooled down, the liver can be chopped in small pieces or everything together can be blended well. The anchovy and the capers can be added at the end, or they can be blended together with the liver.

Several slices of Tuscan bread are toasted and the blended mixture is spread on them. 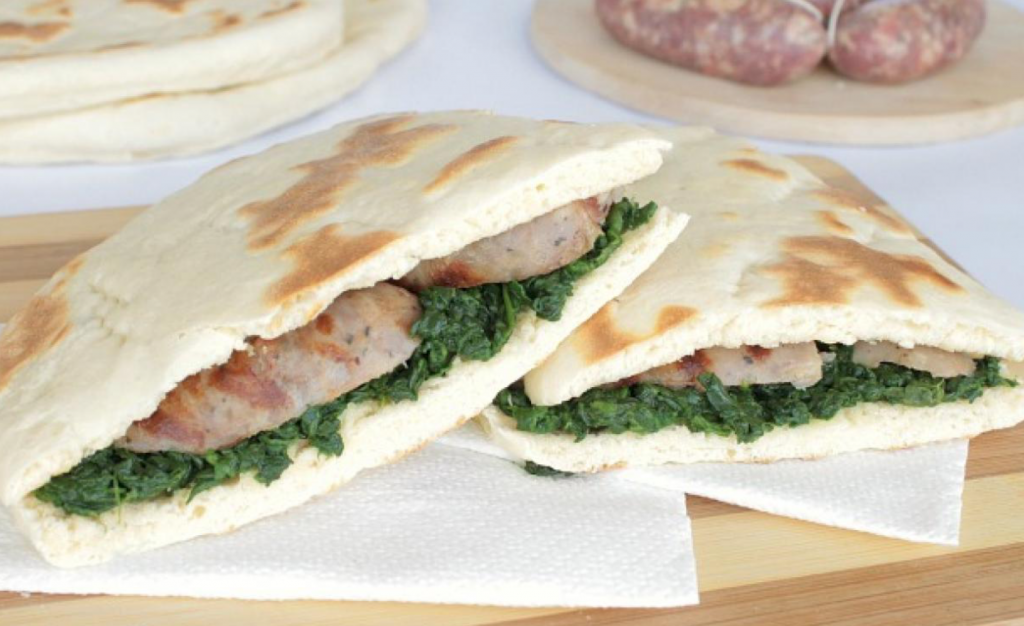 Torta al Testo or Crescia is a traditional unleavened bread from the region of Umbria, Central Italy. The origin of this delicious appetizer dates back from the Roman Empire when these thin, round loaves were baked on large brick discs called ‘testum’. Nowadays, ‘testo’ refers to a cast-iron pan on which the “cake” is prepared.

All products are mixed and kneaded in a medium soft dough. Once shaped, the dough is covered with a cloth and left still for a few minutes.

Then the dough is divided into balls which are shaped into round flatbread (the shape is similar to our ‘parlenki’).

Each flatbread is baked on both sides well (for about 7 – 8 minutes).

After cooling slightly, they are garnished, at your desire, with sausage, ham, different types of cheese or salami.

This appetizer is typical of Veneto, Northern Italy.

The washed-and-cleaned snails are put in a saucepan to boil until they are ready. While they are boiled, the finely chopped parsley and garlic are mixed together and the lemon juice, olive oil, and salt are added.

The boiled snails are removed and drained well, placed on a plate and served with the mixture of spices poured over.

Sardines with raisins and cedar nuts

The raisins are placed in a glass of water for about 10 minutes. During that time the sardines are cleaned thoroughly – their entrails and heads are removed, then, the sardines are fried in butter.

The onion is cut and fried. Shortly before it is ready, 3 tablespoons of wine and salt are added to it. After a few minutes, the cedar nuts, the raisins are added, as well as the vinegar and the rest of the wine. Everything should be cooked until it remains only in fat.

The antipasto is allowed to cool well. It is served with a green salad at your choice.

An appetizer of Figs, Ham and Parmesan

This is one of the most popular appetizers that you can try in Northern Italy, especially in Bologna.

Figs, prosciutto, and parmesan are the perfect summer appetizer, which is prepared quickly and without any effort.

The secret of this antipasto is in the … figs. They must be very well ripe, and must be prepared just before the antipasto is consumed.

The figs are washed thoroughly and dried. The skin is removed and they are cut into halves (if harder, they can be cut into smaller pieces).

On a dish, or plateau, the slices of prosciutto are placed; the figs are arranged on the top; and finally, it is topped up with the grated cheese.

It is good for the starter to cool for 10-20 minutes before serving. 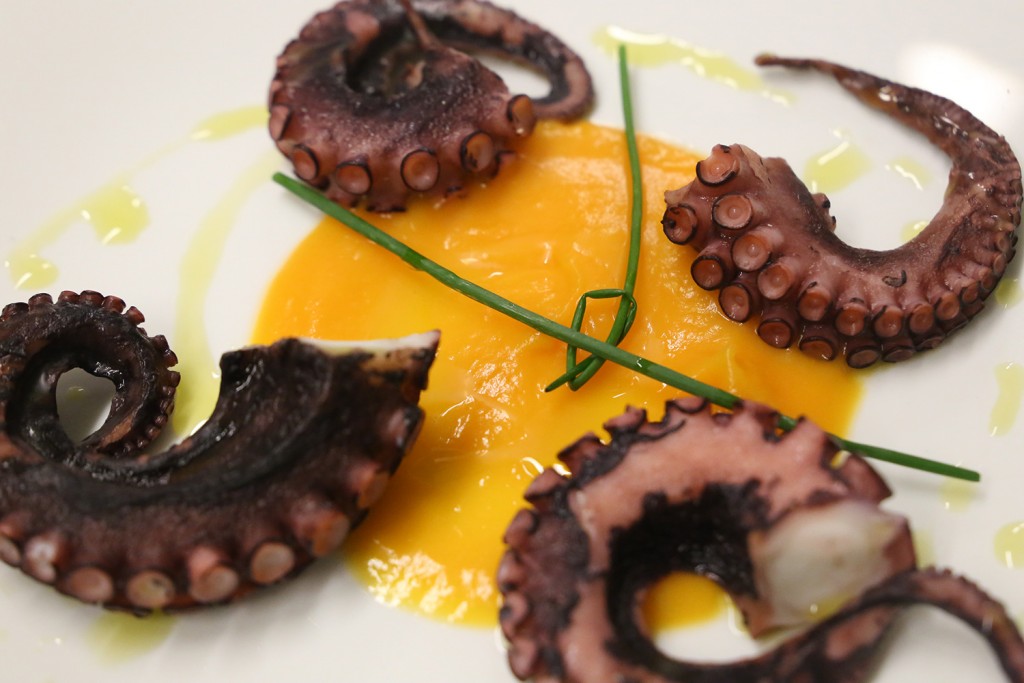 This starter is typical for the Neapolitan cuisine and its name comes from the fishermen of Santa Lucia.

The octopus is washed and cleaned well, then put in a bowl with olive oil together with the finely chopped garlic and a little bit of black pepper. All that is cooked for a few minutes at a high temperature, then the temperature is reduced. The lid of the dish is placed on the top and the octopus is cooked for another 30 minutes at low temperature. A little before the dish is removed from the hob, the tomato sauce is added, which is pre-cooked with garlic. The olives and capers are added and everything is cooked together for at least half an hour. The Neapolitan antipasto is served sprinkled with parsley (pre-cut and lightly fried); it is consumed with a glass of white sparkling wine.

The aubergines and the zucchinis are washed and cut into long strips. The aubergine strips are rolled into whipped eggs and parmesan and fried in olive oil. After that, they are left on paper to absorb the fat from the frying.

The zucchini strips are grilled lightly.

Each roll is prepared by placing the bacon strip at the bottom, then the fried aubergine strip; the grilled zucchini strip, and finally the mozzarella. The products are rolled up and each roll is placed on a baking tray. The rolls should be baked at 200 degrees for a few minutes. The appetizer is served warm.