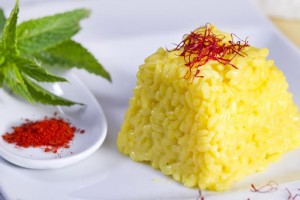 Risotto – an icon of Italian cuisine 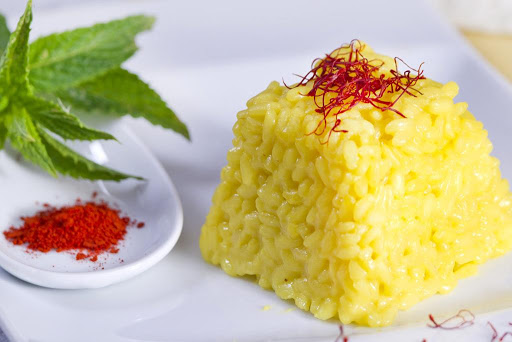 Even if rice is not one of your favorite foods, everything will change if you try it cooked in a way that only the Italians do.

Yes, you have figured it out correctly – we are talking about the Italian risotto, which ranks amongst the most popular and loved worldwide dishes of the traditional cuisine of Italy.

The story of this incredibly simple, but very delicious dish begins with the appearance of the rice in Italy.

Of course, when we talk about Italian cuisine, don’t expect a precise answer from where and when the rice came to Italy, but according to most of the experts this happened in the Middle Ages. During this time, in the ports of Venice and Genoa there were ships carrying exotic Arabic goods in their holds, including the rice that was immediately appreciated by the wealthy Italian families.

They did appreciate its taste qualities, but they also realized that if they grow it on Italian land they would make a lot of money of it.

Fortunately, the Italian lands have been ideal for rice cultivation, and soon throughout northern Italy people started growing different varieties of this food product. 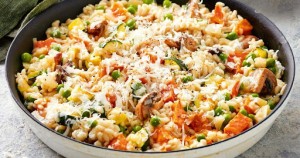 How did the Italian risotto appear?

Very similarly to the story of rice, for the risotto there are not one or two legends, so you decide which one of them you like the most.

According to the first legend, during times of awful hunger, the ruler of Milan sent to the duke of Ferrara several sacks with strange grains and told him to plant them in places where the soil was damp. The duke accepted this advice and only a few months later the Duchy gathered a large harvest of short-grain rice.

Since people were so hungry, the first thing that they thought of was to boil the rice, to “throw” some spices in it, to season it and try it. The dish was not only very nutritious but also very delicious.

The second legend tells about a distracted cook who forgot a soup on the hot plate that had a rice in it. The water of the soup steamed away and the rice with the spices turned out to be very tasty to eat. The cook decided not to throw away the dish and brought it to the table, and the people who had tried it were impressed by its taste.

This legend is the most popular of all and it tells the story of a your artist who helped his teacher to paint the Cathedral of Milan. In order to achieve a brighter color of the paints the young man added some saffron to them.

Once, during the wedding of the daughter of his master, the student added some of the priceless spice to the rice and in this way was created the famous Risotto Milanese. 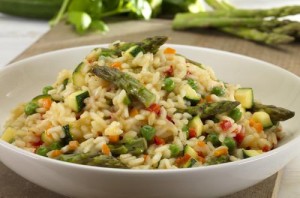 To make the risotto delicious, it must be prepared with…

At first glance, Italian risotto is not difficult to prepare, because its main ingredients are rice, broth, oil (olive oil), wine and, depending on the recipe, the season and region in which it is prepared, it includes also seafood, mushrooms, fresh sausages, truffles, peas and so on.

It takes about 30 minutes to prepare this dish, but during the preparation is required a constant cooking.

And… maybe the easy part of the preparation of Italian risotto stops here.

Why do we say this?

You know that the Italians are perfectionists, especially when it comes to preparing dishes.

To prepare the perfect risotto, you can’t use any rice, but only short-grain rice, special varieties such as Carnaroli, Vialone Nano or Arborio. These varieties are used for preparation of the Italian risotto, because they have a high content of starch.

Another important rule for preparing ideal risotto is that the rice should not be rinsed, washed or cooked in advance, so that the starch is not washed away, which is required to achieve the creamy structure of the dish.

A risotto won’t be genuinely Italian, if the proper ingredients are not added to the main product:

How to prepare risotto?

In a deep enough frying pan, olive oil is heated, where sliced shallot, vegetables, mushrooms are sautéed (if the recipe requires this). This is what we call frying, but Italians call it „soffritto” (mild stirring and frying).

Then the rice is added and it has to get „toasted”. This stage the Italians call „tostatura” and it is very important for the preparation of the ideal Italian risotto.

How to know when the rice is „toasted”? Just put the back of your hand above the frying pan and if the stream of the dish is strong, this means that it is ready to go to the next cooking stagе which includes adding the wine and the vegetable or meat broth.

Add the broth gradually in order the rice to take it fully. The hot plate has to be slowed down and the risotto continues cooking on slow fire, as you have to continuously observe it and stir it from time to time.

At the end of cooking comes the most important element that is called „mantecatura” by the Italians. The word doesn’t have an exact translation, but it means that immediately after the risotto is removed from the hot plate, you have to add to it some more olive oil and parmesan, because these final touches will add to the dish crispiness and great flavors.

The well prepared risotto is „all’onda”, which means that it is not too thick, nor  too diluted. Its texture has to be creamy, but with some crispy grains.

Types of risotto and recipes

Italian risotto is usually served as a first dish before the main dish, but it can be consumed as main dish or in combination with various meals such as Ossobucco.

As for the types of risotto, they are many, because this dish allows many and different variations to be made. If we have to mention some of the most often prepared recipes, then they would certainly be:

To prepare risotto Milanese you will need:

Put in the pan the finely cut onion and olive oil, as the onion has to be fried for about five minutes. Increase the temperature of the hot plate and add the rice to the onion. Fry for a minute.

After the risotto has fully absorbed the broth and its consistency becomes creamy, remove the dish from the hot plate and add the remaining olive oil and the grated cheese.

Cover the risotto with a cloth or a cover to rest and absorb all flavors.

This is one of the fastest and more often prepared recipes of the Italian risotto. The way to prepare it is as follows: