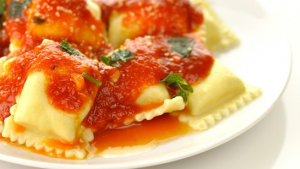 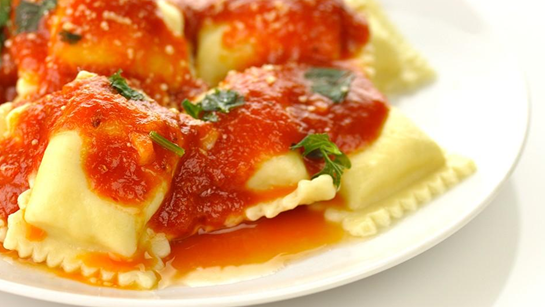 The delicious world of Italian pasta would not be the same without the famous ravioli. They are one of the most beloved dishes in Italy and are prepared in every region and in every home in the country.

Ravioli is a product made of dough, which is filled with various products. Externally reminiscent of the famous Russian dumplings, but their technology and serving is different.

Italian ravioli are world famous, although similar foods exist in the culinary traditions of many other countries. 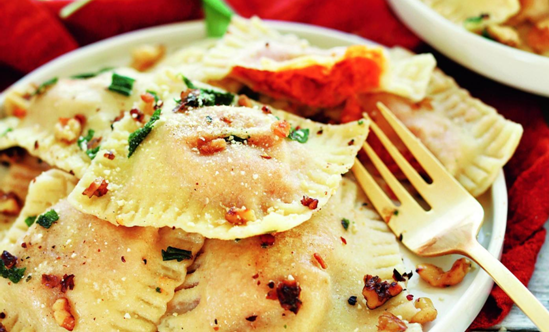 Where do they come from and what do they represent?

The debate over the origin of ravioli remains unfinished. There is an assumption that the recipe came to Europe from China in the XIII century. As in many other cases, it is believed that the credit for this goes to the great traveler Marco Polo.

The earliest mention of ravioli appears in the personal letters of Francesco di Marco Datini, a merchant from Prato, in the 14th century. In Venice, the manuscript Libro per cuoco from the mid-14th century describes ravioli of green herbs mixed with beaten egg and fresh cheese, boiled in broth and seasoned with strong spices.

According to old Italian traditions, this dish is made only from flour, for the production of which durum wheat is used. At the same time, the filling can be the most varied. For it they use meat, fish, vegetables, cheese, mushrooms and other products. After shaping, they can be boiled, fried or stewed in a sauce. 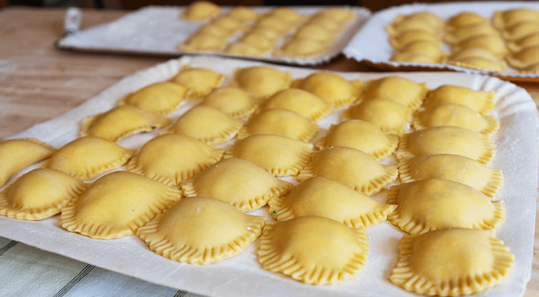 The process of making ravioli is very simple, especially if you get the right shapes and cutter. Now the shops also sell semi-finished ravioli, which makes it easier for the hosts, but the homemade ones are more preferred.

Properly prepared ravioli are characterized by a bright yellow color. The fact is that in the classic dough recipe only flour and water are included, but nowadays eggs are also added.

If the required proportions are observed, an elastic and soft product is obtained.If the dough turns out to be very hard, you can put more eggs in addition to those specified in the recipe. And if, on the contrary, it looks very soft, then you need to add flour to it.

Often store-bought eggs have pale yolks. In this case, you can add a little turmeric or grated carrots to the dough. It is best to thin the dough with a pasta machine, but if you don’t have one, the rolling pin also works.

Ravioli are usually not shaped like dumplings, by first making small circles of dough and then filling them. In order to prepare ravioli, the so-called “package” method is more often used. In it piles of stuffing are distributed on a large sheet of rolled dough.

Then another layer of dough is placed on top, and the gaps between the future ravioli are smeared with egg white or water and lightly pressed to mark the location of the cuts.

Ravioli do not have a specific shape, everyone can cook the product to their liking. They can take the form of a square, circle, rectangle, ellipse, semicircle, etc. 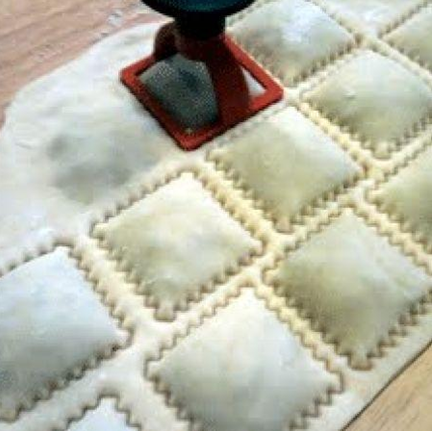 With the help of special shapes or knives ravioli can be decorated with wavy edges. If you do not have such tools, just after cutting, press them with a fork at the edges.

Raw ravioli are usually cooked on a high heat by placing in boiling salted water. They are served with different sauces – tomato, béchamel, cream, etc. They are often grated on some hard cheese – Parmesan or another type.

Types of ravioli and regional features

Very interesting is the fact that ravioli can be served as a first course with broth, as a second with various sauces and as a dessert.

Ravioli differ mostly in the products in the filling and have the appropriate name:

If you make sweet ravioli,  then use mainly cottage cheese and ricotta for filling, seasoning them with sugar, eggs and cinnamon. They can be filled, for example, with strawberries or berries and served with fruit sauces. Chocolate ravioli with raspberries have a supreme taste and vision. 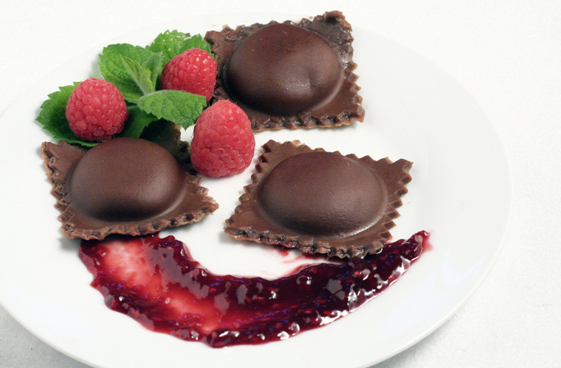 In the different regions of Italy, ravioli, like any other pasta, has its own characteristics both in terms of types of flour and fillings and sauces. It is generally believed that ravioli are more characteristic of Central and Northern Italy, but gradually they conquered the whole of Botuş.

In Rome and Lazio the filling most often includes ricotta cheese, spinach, nutmeg and pepper.And in this group of pasta there is the trademark Bolognese. tomatoes, wine, onions, garlic, celery, carrots and peppers.

The sauce is prepared from olive oil, canned peeled tomatoes, fresh basil, black pepper and a clove of garlic. The ravioli are boiled briefly in salted water and then served with tomato sauce.

In Sardinia they prepare interesting ravioli with potato filling. The dough is prepared from durum wheat semolina and flour, olive oil and salt.

The filling is prepared from boiled and mashed potatoes, to which are added crushed garlic clove, chopped mint stalk, grated Pecorino cheese, ricotta and olive oil.

Roll out the dough thinly and form circles. Put the stuffing in them, fold it in two and with the help of two fingers start to roll out the dough slightly, so that you get something like wheat class.

Pour the tomatoes for the sauce in a deep cooking vessel, add sugar, oregano, chopped garlic, olive oil and salt and cook for ten minutes. Ravioli are served on a plate on tomato sauce, sprinkled with grated Pecorino. 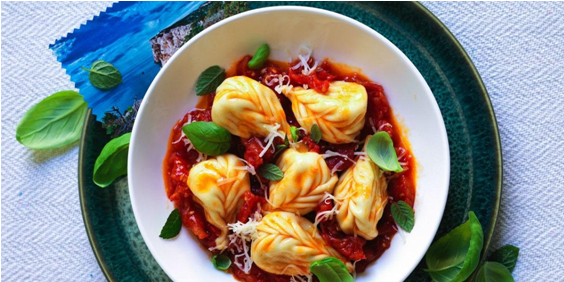 Ravioli with spinach and ricotta

The flour is sifted and mixed with wheat semolina and salt. Pour into a pile and make a “well” in the middle. Beat the eggs in it and knead the dough. It is formed into a ball and left to stand for half an hour.

Blanch the spinach for 5 minutes in boiling salted water. After draining, cut into small pieces. Mix with the beaten egg and ricotta. Add salt and pepper.

The dough is divided into 4 parts and each of them is rolled out thinly. Put a spoonful of the filling on the rolled crust at a short distance from each other. Cover the top with another crust and cut with a ravioli cutter or knife. The ends are pressed with a fork so that the filling does not run out during cooking. The ravioli are boiled 9-10 minutes in pre-boiled salted water.

Peeled tomatoes, onions and garlic cut into small pieces. In a deep frying pan, heat the olive oil and fry the onion and garlic for 2-3 minutes. Then add the tomatoes, sugar, oregano, salt and pepper. Simmer over medium heat for about 30 minutes, until the sauce thickens. The ravioli are served with tomato sauce. 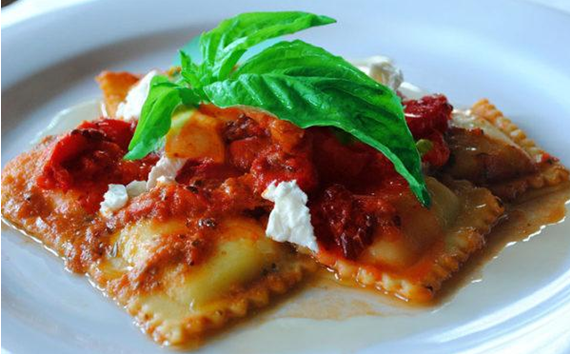 Sift the flour into a large bowl and make a “well” in the center. Beat the eggs with olive oil and salt. Pour the mixture into the cavity in the flour and knead a homogeneous dough, adding more flour if necessary. Cover the dough with foil and leave for 15-20 minutes

Heat a frying pan with vegetable oil, add the minced meat and fry, crushing the lumps. Add onions, carrots and garlic. Cook for another 5 minutes. Add the egg yolks, tomato paste and oregano, as well as salt and pepper.

Roll out the dough on a flat surface on a thin rectangular sheet, cut it into two equal parts. Place a filling with a spoon on one sheet at a distance of 4 cm. Moisten a silicone brush with water and draw lines between the pieces to form squares. Cover with the second part of the dough, press it lightly. Using a chainsaw, cut squares along the drawn lines.

Boil salted water in a large saucepan and release the ravioli. Cook them for about 10 minutes. Spread them on a plate with grated parmesan or sauce of your choice.