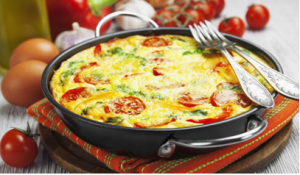 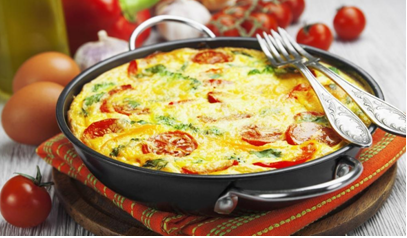 There are probably people who are convinced that eggs are the simplest dish, for which there is not much to think or write. This is definitely not true. Eggs are a vast culinary universe and are the best example of how hundreds of recipes can be created on a single product. And this is mostly true for Italian frittata (frittata).

It is something like an omelet, enriched with various additives that give a different look to this delicious dish. To be convinced of the qualities of another culinary masterpiece from Botusha,  you must at least once try eggs in Italian, to become a real fan of them.

What are eggs in Italian?

The whole ** Italian cuisine ** is characterized by an amazing harmony of aromas and tastes, and the most important thing is the simplicity of cooking. This fully applies to frittata. It is believed that the egg dish was originally invented by Italian peasants, who could not afford expensive products.

So they mixed eggs with everything that is grown in the garden. Not only does this not make frittata a tasteless bun, but on the contrary. The food is very tasty and can be different every time.

No less important is that it is cheap and affordable for every pocket. For these reasons, it is no wonder that it is a favorite dish of Italian hosts, and its fame has already crossed the borders of the Apennines. 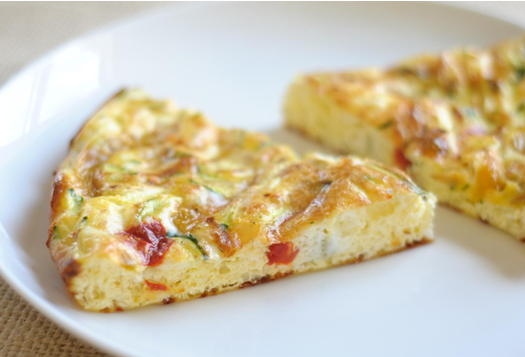 Frittata is a typical egg-based Italian dish, which can be likened to an omelet or scrambled eggs, also reminiscent of egg casserole. The word frittata is Italian and generally translates as “fried”.

Originally, it was a general term for cooking eggs in a pan, covering the whole spectrum from fried eggs, through the standard omelette, to the Italian version of the Spanish omelette with potatoes, called a tortilla.

Outside of Italy, frittata is considered an “omelet” at least until the mid-1950s. Fritt then became a term for a different dish, which the famous English author * of culinary bestsellers and TV presenter Delia Smith described as “Italy’s version of an open omelet”.

The Italian variety of scrambled eggs is prepared with the addition of various products: meat, sausages, vegetables or cheese. Frittata can be served as an appetizer or main course, hot or cold, alone on a plate or garnished with salad.

How is Italian frittata prepared?

There are many subtleties for making real frittata. It is baked both in a pan and in a pan in the oven. To make the egg dish more airy and light, you need to separate the yolks from the whites and beat them separately.

In this case, the proteins must be mixed to stable soft tips or as they say “in the snow”. And to get the required consistency of the finished frittata, add a tablespoon of cream or milk to the egg mass.

In Italy, frittata is so popular that a double pan with two handles has been created especially for it to put in the oven. 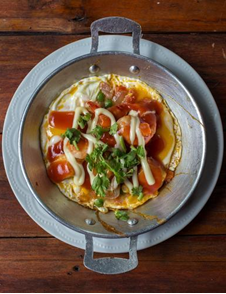 Eggs are prepared in Italian by placing the pan on low heat, heating the butter and only then pouring the mixture into it. You can also use a non-stick frying pan with a flat lid with a larger diameter so that the frittata is easier to turn.

Once the eggs are fried until golden, cover the pan with the lid and turn over, then slide quickly so that the unroasted side is down to the bottom of the pan. Then increase the heat and fry the dish. Another option is to bake in the oven.

It is characteristic of the frittata that it always has at least one additional ingredient in addition to the eggs. The difference from the traditional omelet is that the toppings are put in the beaten egg mixture, while it is raw, instead of being placed as a filling on the already fried eggs before being folded in half.

It has already become clear that eggs need to be vigorously beaten and include more air than traditional omelets to get a fluffier result. The mixture is prepared on a very low heat, slower than an omelet, for at least five minutes, and usually takes about 15 minutes. Unlike the omelette, the frittata is not folded, but completely turned over in the pan or placed in the oven and baked on top for about 5 minutes.

Frittata with broccoli and goat cheese 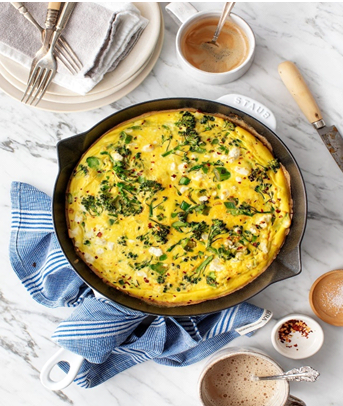 Turn on the oven to preheat to 180 degrees. Beat the eggs well and add the milk and finely chopped garlic. In a suitable pan, heat 1-2 tablespoons of olive oil  and add the finely chopped fresh onions and broccoli. Season with salt and pepper to taste and fry for about 7-8 minutes, stirring constantly.

Then add red pepper, already prepared egg mixture and sprinkle with goat cheese. If the pan is suitable for baking in the oven, use it, if not, just transfer the mixture to a suitable pan and bake for about 15-20 minutes, until the eggs are fully cooked. 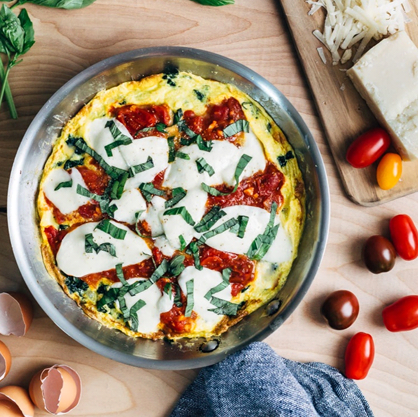 Turn on the oven to preheat to 180 degrees. Beat the eggs well and add the milk and finely chopped garlic. In a suitable pan, heat 1 tablespoon of olive oil, add finely chopped fresh onions and season with salt and pepper to taste and stirring constantly fry for about 5 minutes.

Then add the cherry tomatoes, a little fresh basil to taste and the already prepared egg mixture. If the pan is suitable for baking in the oven, use it, if not, transfer the mixture to a suitable pan.

Cover with pieces of mozzarella and bake for about 15 minutes, until eggs are fully cooked. If desired, it can be sprinkled with fresh basil when serving.

Frittata with potatoes and green onions 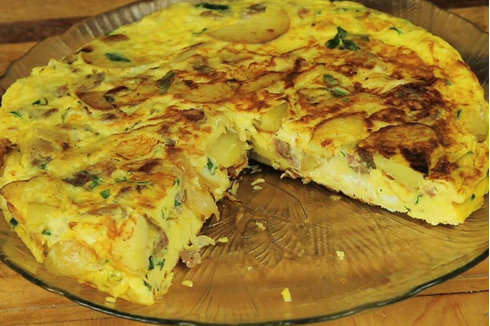 Boil the potatoes and after they cool, cut them into slices. Heat 2 tablespoons olive oil  in a pan. Put the potatoes in the pan. Beat the eggs (preferably the yolks and whites separately) and season with salt and ground black pepper. Add the chopped green onions and, if desired, a little basil or parsley.

After the potatoes are fried, pour the egg mixture over them. Cover the pan with a lid, to bake the top of the frit. If the pan is suitable, you can put the toaster in the oven. Serve the dish warm, you can garnish with arugula or lettuce.