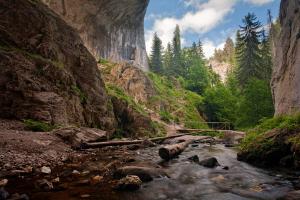 Cuisine of the Rhodope Mountains

The Rhodope region will enchant you not only with its magnificent mountain landscapes. The geographic, historic and climatic specifics of the area, as well as the closeness to our southern neighbors, Greece and Turkey, have brought to the Rhodope culinary heritage a unique spirit and colorfulness.

Specifics of the Rhodope cuisine

Cuisine in the region impresses with its eclectic assortment and old recipes, which have been passed down from generation to generation, and in this way they are preserved to the present day. The culinary repertoire itself adds more charm an authenticity to this region.

The morning breakfast in the Rhodope Mountains often includes doughy products that resemble the banitsa, but are called „tenurki“. They have many other names depending on the different dialects in the country, but most often in the other parts of the country they are known as Gözleme (from Turkish„göz“- pocket).

They are made from very thin phyllo pastry, wrapped in a pocket with some cheese, which are baked on a plate (sach). Pancakes and many other traditional doughy products are also prepared on sach. 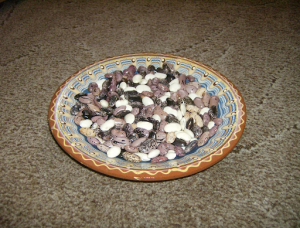 There is a cult of beans – and even something more

One of the emblems of the region is the famous Smilyanski beans. It is one of the few traditional Bulgarian products that have the status of a protected name of origin. This beans can be grown only in the upper part of the амо в Arda river valley, mostly in and around the village of Smilyan, which is closed to the town of Smolyan. The Rhodope Smilyanski beans is used for the preparation of a number of incredible dishes, for example, bean salad, bean appetizer, bean soup, fried beans and many others.

Potatoes are highly appreciated and used in the local culinary tradition. They are also the key ingredient of the famous Rhodope patatnik – something on the average between gratin and banitsa with cheese and potatoes, traditionally seasoned with spearmint. Some people prepare the patatnik with pastry sheets for banitsa, while others use only potatoes. If you like you can add some homemade yellow cheese to it as an optional ingredient.

The Rhodope region is unique with its love for a vegetable that elsewhere in Bulgaria seems to be not so important, and that has only recently returned to the culinary charts along with the gourmet recipes and exotic demands of the foreign professional chefs.

It is the kohlrabi, which in the Rhodope Mountains is simply called a „kochan“. In addition to being very good for the health, the kohlrabi has a great taste and can make any recipe tasty. The Rhodope hosts have learned this a long time ago, that is why this vegetable has become a key ingredient of many dishes. In some of them it is even a main ingredient, for example, of the kochan soup, klin (banitsa) with kochan, kochan with potatoes, and so on.

Among the treasures of the region are also the authentic recipes for Rhodope kachamak, which can be preapred in several different ways. Although this delicacy that is made from corn flour is present in many areas in the country, and also in all countries on the Balkan Peninsula and beyond, the Rhodope kachamak has gathered in itself the unique characteristics of several cultures, which makes it special. It can be prepared according to the classic recipe – with cheese and butter filling, but it also can be cooked, for example, with greaves or eggs.

Another typical dish of the Rhodope area is the so-called ushmar. It is a variation of kachamak, which is prepared in a by placing homemade cheese, cow’s butter and yellow cheese, water and salt in a common pot,  cauldron (kettle) or a bowl. These products are boiled until they become homogenous, then the kachamak is added, although that some people prefer first to fry the corn flour and butter, and then to add gradually the other ingredients. 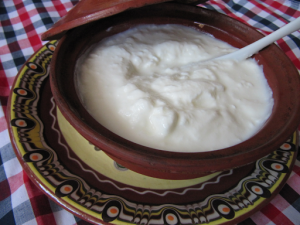 If it happens for you to walk in the Rhodope Mountains during the spring season, you should not leave without having tried the local vegetarian delicacy of the season – mashed nettle with cheese.

Nettle is a spring herb that is used in many regional traditional recipes. The Rhodope kiln can be prepared with nettle. It is the traditional banitsa that is made with phyllo pastry, as many eggs as possible, as well as with rice, cheese and milk.

The nettle can be replaced and the dish can be prepared with spinach, sorrel, sour grass, leeks, in combination, as well as without green leafy vegetable.

The traditional pancake in the Rhodope Mountains, typical for the town of Chepelare, is called marudnik. It is prepared with yoghurt and baking soda. These pancakes are similar to French crepes, but they are made much faster and are slightly thicker. Traditionally they are baked on sach, not in a frying pan. Another dish that is similar to marudnik is the kolak. Both dishes can be consumed with any type of filling to taste, sweet and salty, etc.

The Rhodope cake is called promatnitza on the local dialect, and the small cakes made of wheat flour, are called prepitelnitsi.

Neither the kachamak, nor the kiln or other Rhodope recipes would be possible without high quality cow butter. Rhodope cows have permanent access to fresh green grass on the lush Rhodope meadows all day long and that is why their milk is so rich in fact and beneficial nutrients. Various types of cheeses according to authentic recipes are produced in the region, and they can popularize our country in the world.

The pride of the Rhodope dailry farmers is the „Rhodope“cheese, which resembles the popular Italian Parmesan. In the region, you can also try the churned cheese (from Turkish imansaz), also called brunza. The special things about it is that the milk for it is skimmed.

Imansaz can be prepared from sheep’s or cow’s milk of choice. The local curd is used for the production of the so-called biberchevo cheese, which is a mixture with finely chopped green peppers.

Because of the high fat content of the milk here, the yoghurt is so thick – as it is said – it can be cut with a knife. Local people consider this product the best cosmetic, medical, dietary remedy – yoghurt is believed to be unique and omnipotent!

Of course, nothing is better in taste than the Rhodope cheverme. It is made mostly from a lamb. Dried meats are highly appreciated in these lands, and there are a number of recipes that include them.

A favorite dish of the local people since childhood are the variations of the dish known as kasha (gruel). It can be a corn gruel with water, wheat-milk gruel (known as parenitsa according to the local dialect), as well as a hot gruel.

The Arab influence is the Rhodope Mountains can be felt in the local trahana (from Arabic tarhana). As a concept is something like the Middle Eastern version of the Italian pasta, as it is also a dry product that is prepared and preserved in order to be used as a pulse.

Trahana is made from dough, which also contains vegetables and yeast (leaven). Once it rises, the mixture is baked and then is dried several times, until we obtain something like breadcrumbs. So prepared, it can be stored in a bag of fabric or other material for a relatively long time, in a jar or in a box. The tarhana can be boiled with water or milk and added to various dishes, for example, soups, as it gives them an incredible and rich aroma.

Homemade couscous in the Rhodope Mountains

Homemade couscous is prepared nowadays in the Rhodope Mountain, although not than often as it has been prepared in the past. It is very similar to the original Arabic recipe. In fact, it is a cereal breakfast made from solid wheat, and not with pasta.

Keşkek is also prepared in the Rhodope Mountains. It is a dish made from hulled wheat, i.e. wheat and butter. Keşkek has a sweet version that is made with a bulgur and is sweetened with sugar. For dessert can be made the sweet Rhodope kiln with bulgur or a pumpkin with powdered sugar.

Typical spices for the Rhodope region are the spearmint (gozum according to the local dialect), the parsley, as well as red pepper, savory, and so on. 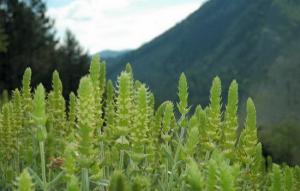 A wonderful warm and healthy drink, that you can try during your stay in the Rhodope Mountains, is the Mursalski tea. It is prepared by the flowers of a plant that is among the protected species in our country.

Mursalski tea grows most delicious and its healing properties are the most powerful in the Mursalitsa area, which is located in the heart of the Western Rhodope Mountains. The drink made of it has a particularly beneficial effect on the cardiovascular system, it lowers the blood pressure and thus acts prophylactically against strokes and heart attacks.

It is also very beneficial against pulmonary, liver and kidney diseases, and it also can be used as an antidepressant, it is believed to contribute to the fight against cancerous diseases.

The Rhodope region is also known for its non-alcoholic cider, called langur. It is a naturally carbonated beverage, which is made from wild hips and apples (sour), as other fruits can also be added. This drink is perfect for the summer season when we are looking for coolness and relaxation in the mountain.

Of course, apart from the longur, it is good to drink a glass of Rhodope rakia (brandy) or an authentic local wine.

But you should not be surprised if you try to prepare one of the abovementioned recipes at home and the result is not that magical. This is not because we are exaggerating in our descriptions – it is simply because no Rhodope dish can reach and unfold its full potential if it is not made with the real, authentic and homemade products from this region.